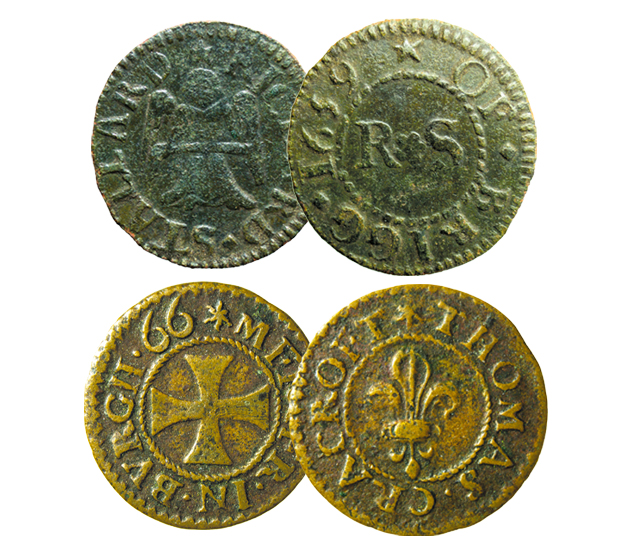 Colin Smale continues to trace the history of 17th-century traders’ tokens in Lincolnshire. Compared to everyday coinage, traders’ tokens are quite rare, as they were only in circulation from 1656 to 1672.

This month we look at examples struck in Brigg and Burgh le Marsh.

BRIGG
The farthing shown (Picture 1) has its origins in today’s Brigg Heritage Centre, which was originally a seventeenth-century coaching inn called The Angel. Although this token is not in as good a condition as some other tokens, you can still clearly see an angel in the centre of the coin with the name Richard Stallard around the edge. On the reverse it reads ‘Of Brigg. 1659.’

So, who was Richard Stallard? He was a vintner and he ran the Angel coaching house. Unlike some of our Lincolnshire traders, Richard left scant details of himself. He died and was buried on 16th July 1669, just ten years after this coin was struck.

There is not enough space to describe all the other Brigg traders but a quick mention of their names may be of further interest to the inhabitants of Brigg today: John Bealey, Peeter Metcalfe, William Melton, Robert Trowan and Thomas Waterland.

Burgh le Marsh
We now move to Burgh le Marsh where just two traders had tokens struck for themselves. One was John Shaw, a mercer; the other was Thomas Cracroft, also a mercer.

Thomas’ token (a farthing) of 1666 sports a cross pattée (a type of Christian cross) and a fleur-de-lis, traditionally representative of French loyalty! On the fleur-de-lis side the legend reads ‘Thomas Cracroft’ and the cross pattée side reads ‘Mercer in Burgh’.

So, what do these symbols tell of Thomas? Almost certainly he was a practising Christian because he requested a cross pattée on one side of his coin. But the fleur-de-lis? The immediate thought is, was his wife French? The records show he married Margaret Weldon on 11th December 1666 but she was a spinster from Ingoldmells. Perchance we shall never know why he chose that fleur-de-lis.

Sadly, as was often the case in those days, his wife died from childbirth the following year (1667). His second marriage to 23-year-old spinster Margaret Anton from Croft fared not much better, their two children died before reaching one year old.