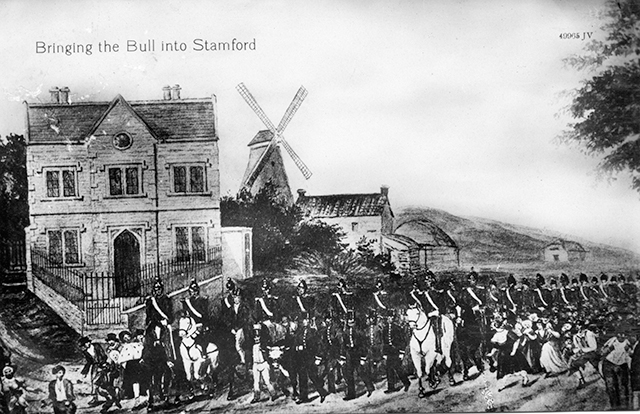 Many English villages, towns and cities have quirky traditions going back centuries and an activity known as ‘bull running’ in Stamford, Lincolnshire, certainly fits that description, writes Alan Middleton.
The event, which was held on 13th November, St Brice’s day, each year was variously described as a festival, a hunt, a riotous custom, a sport, an ancient amusement and latterly, by those opposed, as illegal and disgraceful.

According to local folklore, the custom dated back to the time of King John, when William de Warenne, 5th Earl of Surrey, standing on the battlements of his castle, saw two bulls fighting in the meadow below. Some butchers came to part the combatants but one of the bulls escaped and ran off into the town causing great uproar. Many people were injured and market stalls overturned. The Earl mounted his horse and rode off after the animal and enjoyed the experience so much that he gave the meadow in which the fight began to the butchers of Stamford on condition that they provide a bull, to be run in the town on 13th November every year thereafter.

The town of Stamford acquired common rights to the grassy floodplain next to the River Welland, which was then known as Bull Meadow, today just as The Meadows. The story which has been passed down the years has it that the event started at 10.45am with the ringing of St Mary’s church bells which quickly brought about the closing and boarding up of shops and the barricading of the streets with carts and wagons. By 11am large crowds had gathered and the bull was released, baited by the cheering of the crowd and, among other things, a man who rolled towards it in a barrel. It was then chased through the main streets to Bull Meadow or sometimes into the River Welland. Eventually it was caught, killed and butchered. The meat was distributed to the poor of Stamford and as such, the custom by the 18th century was supported as a charity by donations.

Historians of the era described how the bull was chased and tormented for the day before being driven to Bull Meadow and slaughtered. It is recorded that the event was accompanied by a great deal of drunken, disorderly behaviour.

Bull running in Stamford was the subject of an 1833 campaign by the RSPCA. Some Stamford residents defended the ancient custom as a “traditional manly English sport inspiring courage, agility and presence of mind under danger”. Its defenders also argued that it was less cruel and dangerous than fox hunting. In 1836 five men were tried for rioting, three were convicted but this only inspired the town to plan an even bigger event for the next year.

The Mayor of Stamford, at the direction of and with the support of the Home Secretary, used 200 newly sworn in Special Constables, some troops and police brought in from outside, to stop the Bull Run of 1837, but it went ahead anyway. The bull and the people ran through the security line, a riot followed and it was a miracle that no-one was killed, not even the bull.

The last Stamford Bull Run was in 1839 in the face of an even larger force of police and military. The run was short, with the bull being captured quickly by the peace-keepers and without any serious incident. Because the townsfolk were forced to bear the cost of the military presence for several years in a row, they agreed, that year, to discontinue the practice and they kept their word. Stamford Bull Running was consigned to history.