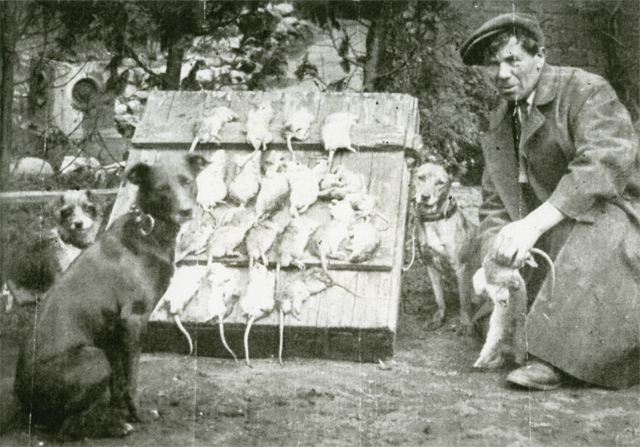 In this article we take a look at some of the characters of old Lincolnshire. John (Ratty) Fulton was born in 1872 at a public house in Saltergate, Lincoln, ‘the Beehive’, which was on the site where the RBS bank now stands.
Ratty Fulton was employed by Lincoln Corporation as a rat-catcher, catching rats for tuppence a rat during the annual Lincoln ‘Rat Week’. He made a valuable contribution to the city, as Lincoln’s rat population, encouraged by waterways, canals and a network of sewers could easily have got out of hand without his efforts.

He lived in a series of public houses for most of his life, including the Horse and Groom on Newland and the White Bear on Danesgate. He could often be seen in pubs around the city with his dogs and ferrets. It is said that he worked as a rat-catcher for sixty years, which would mean that he started at the age of eleven or twelve. He died in 1944 having caught thousands of rats in the course of his career.

Spider ‘Arrod was well known around Billinghay in the 1930s. His wife ran a lodging house. Spider was a tall, thin man with a large selection of cloth caps, but the lodgers saw very little of him as he lived a busy life. He delivered newspapers before breakfast, swept chimneys in the morning, cut hair in the afternoon and in the evenings he visited all six pubs in Billinghay, downing a pint and a whisky chaser in each one.

Another well-known character of the Victorian era was Frank ‘Pie’ Walker. He came to Lincoln from Boston and ran a baker’s shop on Waterside North. At various times during the day he would hawk his pies around the city on a hand cart, complete with a coke fire to keep them warm, crying “pies, pies, tuppence a pie”. He also carried a can of gravy which he would supply with the pies, if desired, at no additional cost.

Fiddler Joe and his wife were the Lincoln equivalent of London Buskers. They were a popular couple who could often be seen wandering around the city; Joe with his fiddle under his arm, his wife a little way behind. She wore a bedraggled old black skirt and worn out elastic sided boots, several sizes too big for her. He dressed no better. They visited the city’s many public houses of an evening. Their repertoire seems to have been fairly limited, consisting, as it did, of just two songs: ‘Down Among the Coal’ and ‘Pop Goes the Weasel’. Next, she performed a little dance while he played the fiddle with great ferocity. He then attempted to collect some money with varying degrees of success. They once performed at Robey’s canteen while the men ate their dinner. They lived at a lodging house in Thorngate, next to the Green Dragon.

A familiar sight on the streets of Lincoln in the mid twentieth century was Leslie Briggs (1915–1997), universally known as Briggy. A popular figure who had a word for everyone, Briggy was employed by the Council as a roadsweeper. After his retirement he attempted to supplement his income by busking with a mouth organ. His main problem was that he could not play any tunes, not a single note; all that came out of the instrument was a dreadful noise similar to that of a cat which had just been trodden on. His ‘takings’ are not thought be have been very high, very often.

Part two in your November issue of Lincolnshire Life Magazine