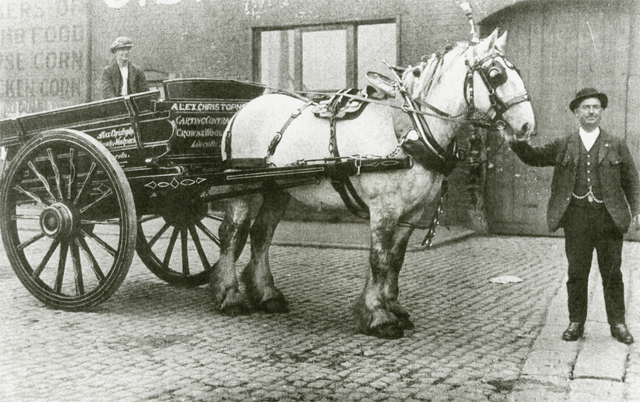 One of the first people to sell the Lincolnshire Echo on the streets of Lincoln when it first appeared in 1893 was John Banks Smith or ‘Cuckoo Smith’ as he was known.
He attained the nickname because he also sold a comic of that name and would walk up and down High Street, calling out “Cuckoo”, followed by a troop of small boys also shouting “Cuckoo”. To their amusement he eventually chased them off but never caught any.

Smith was a well dressed man who wore a smart suit and a silk hat. It seems that he had come down in the world, having previously run his own business as a printer and stationer who owned a carriage and pair. One of the best known and most popular Lincoln characters of the twentieth century was Alex Christopher, described by some as ‘full of repartee’.

In the Lincoln Review of 1921 and 1922 he advertised as a general carting contractor and buyer of metal, wool and skins. But by the middle of the century he was operating as a horse flesh dealer and that is what he is best remembered as.

He had two shops, one on High Street, where the Mini Market now stands, and one on Mint Street. Christopher was a man with a bit of style, he had a pocket watch on a gold chain and always wore a fresh flower in his buttonhole every morning. He lived at a former public house in Brayford Street, the Crown and Woolpack.

Torksey Ned moved to Lincoln and lived at the Lodging House in Thorngate. In his early days, Ned, a big man, had been a cattle drover and would often be seen around the Lincolnshire cattle markets. He wore heavy clogs and had a long heavy coat held together with string and a battered old top hat, held on by string tied under his chin. He kept his sandwiches under his hat. When he retired from droving he did a few odd jobs, but most of his income was gained in pub yards. He would search under carriers’ carts for beer barrels, drink what was left in them and then carry the empty barrels on his shoulders down to the brewery of Dawber and Co on Newland, where he would be given a few pennies.

Around lunchtime, he could often be seen on the steps of the old butter market on High Street, eating his sandwiches. He died in 1886.

One of the most colourful characters of the 1940s and ’50s went by the name of Prince Monolulu. He visited Lincoln during race weeks, particularly the ‘Handicap’. He dressed very colourfully as a Native American complete with feathered headdress. He would walk up and down High Street calling out, “I’ve gotta horse”, and if you crossed his palm with silver he would tell you what it was; a sort of latter day racing tipster.

Salt Coggage was a man who sold the Lincolnshire Echo in Lincoln High Street in the 1950s, outside where Peacocks now stands. He would shout “Salt Coggage” and nobody had any idea what it meant. However, Lincolnshire Life can now reveal exclusively that it roughly translates as ‘expensive rubbish’. ‘Salt’ was once local Lincolnshire slang for expensive and ‘Coggage’ was general slang for a newspaper full of bumf or rubbish. Nobody can be traced who knows his real name, and I can find no pictures of him, but he is remembered as being somewhat disabled. He rode a specially adapted bicycle, with difficulty.