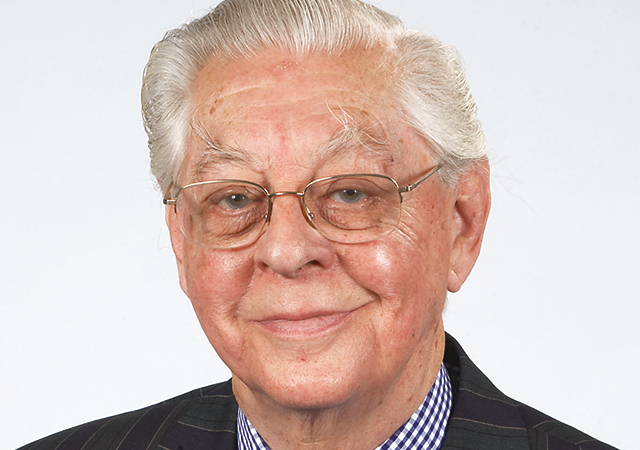 There are several of us at Lincolnshire Life, myself included, who have completed two or three decades of service with the magazine. All of us, though, hold in awe and are never likely to match the contribution made by David Robinson who, we were sad to learn, passed away last month aged 89.
On his retirement from the magazine six years ago David had completed five decades of service and up to that point his by-line had appeared in every issue of the magazine. I am sure this must be a national if not a world record in print media but despite my best efforts I could not verify his achievement.

David was born in Croft Street, Horncastle and attended Queen Elizabeth’s Grammar School. After graduating from Nottingham University with an honours degree in Geography he went on to complete an MSc with a thesis on the coastal evolution of north-east Lincolnshire.

David returned to the county where he taught in schools in Immingham and Grimsby before becoming tutor organiser for the WEA in South Lindsey.

He founded a magazine ‘The Lincolnshire Poacher’ during this time, filled with stories and articles about his native county. Publication was brought to a premature end when the printer went under but not long afterwards he was approached by a freelance Grimsby based journalist, Roy Faiers, who was launching a new magazine, Lincolnshire Life, and he invited David to become involved.

His regular feature ‘Poachings’ was still running when I joined the magazine in 1997. A mixture of snippets of history, dialect, news and nostalgia about the county, David was also able to draw upon his vast collection of postcards, slides and drawings to illustrate the column. In addition he was also our book reviewer and wrote features to promote heritage events and anniversaries as they cropped up throughout the year. His output was prodigious.

Many of the titles on his abundantly stacked bookshelves at his home near Louth town centre, carried his name on the cover: Louth Panorama, Adam and Eve and the story of Louth Carpets, the Book of the Lincolnshire Seaside and the story of his hero, Joseph Banks at Revesby published in 2014. For his retirement from Lincolnshire Life, David was delighted when we sponsored a stone in his name close to the Joseph Banks memorial in Lincoln Cathedral.

Lincolnshire Life was not the only organisation which benefitted from his commitment to all things Lincolnshire. David held many offices with county organisations – chairman, honorary secretary, vice chairman, president, advisor of such bodies as the Lincolnshire Wildlife Trust, the Society for Lincolnshire History and Archaeology, the Sir Joseph Banks Society, the Louth Naturalists’ Antiquarians’ and Literary Society, and the Heritage Trust for Lincolnshire. He was also the driving force behind the refurbishment and re-opening of Louth Museum.

In addition to his research, talks and writing, he had a lifelong commitment to the Methodist church where he served as a local preacher and on many committees including as a Council Member of ‘Churches Together in Louth and District’.

It was journalism, as well as his services to the community in Lincolnshire, which earned him the award of Officer of the Order of the British Empire (OBE) in 1997.

Despite the hours he committed to writing, giving talks, attending committees and to family life, David would always be on hand to answer queries and guide me in my early days with the magazine as to the correct contact or interpretation of county history. ‘Ask David’ was the office mantra if we could not solve a query and I cannot remember an instance when he was not able to come up with the answer.

In the rear window of David’s car was a sticker he designed himself which read: ‘I love my Lincolnshire Life’ and he did. I cannot think of anyone else who has done more to demonstrate his passion for our wonderful county than David Robinson. We will all miss him.

David’s wife, Joyce, died three years ago and he is survived by a son and daughter.

Judy Theobald, editor of Lincolnshire Life from 1999 to 2007 wrote a poem to mark David’s retirement from Lincolnshire Life in 2011. Here we reproduce the words which encapsulated David and his encyclopaedic knowledge.

DAVID KNOWS
When does the bedstraw hawk moth fly
And where does the bittern boom?
In which of our county’s ancient woods
Does the bird’s nest orchid bloom?
And when is the season of the year
When the salty samphire grows?
Forget all those shelves of reference books,
It’s simple – David knows.

Which town always made the finest bricks?
Who marched with the Lincolnshire rising?
Who knows how the wolds and fens were formed?
The answer’s not surprising.
For here is a man whose birthplace
Is the source of his lifetime’s joy.
From its rocks to its seas and its open skies
He has studied it man and boy.

And the pleasure he gains from this study
Is not one he keeps to himself.
He has passed on his knowledge to thousands
Through his books on the library shelf,
And the people he’s taught down the decades
And the broadcasts he makes every year
Have let the whole world know what Lincolnshire is
And just how it came to be here.

You’ll find him on archaeological digs
In town, village, parish to city.
He changes the way that we look at ourselves
Through his work on all types of committee.
And yes, if you need to know who did what when,
Or why the north-easterly blows,
Or where the natterjack toad has his haunt:
Remember this well: David knows.