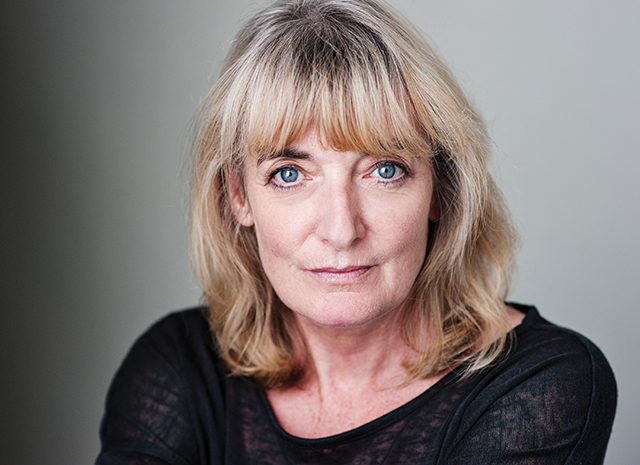 Actress Elizabeth Rider has appeared in many of the nation’s best loved TV shows, including this year’s hugely successful sixth series of Line of Duty. She spoke with Kate Chapman recently about her theatrical roots and life in the county.

She has played everything from downtrodden mums to steely police officers with acting credits including Coronation Street, Eastenders, The Lakes, Casualty, The Bill, Silent Witness and BBC One’s smash hit drama Line of Duty to her name.

“The lovely thing is, I do not seem to have been pigeon-holed. I’ve been in most of the soaps including Eastenders – for a time, I think I was the only nurse in Walford General, I think I worked in every department!” says Elizabeth, who has lived near Grantham for over 30 years. “I’ve done a couple of stints in Coronation Street including one as Ashley Peacock’s biological mother, which was great fun. I loved being in The Lakes too – I really love emotional roles.

“Call the Midwife was another favourite, although sadly my character died in the first series, so I couldn’t come back for future episodes.

“While last year was quite mixed – I was a Deputy Chief Constable in Line Of Duty, played a fairly pathetic mother in another film and then I’ve just done an online play, where I was a 70-year-old with dementia – they’re all rich and varied and that’s what I love.”

Elizabeth, who was born in Newark and grew up in Upton, between Newark and Southwell, was about seven years old when she decided she would like to be an actress.

“It was either an actress, be in the circus or stop the Vietnam War, although the latter was a little bit beyond me,” she recalls. “There are no other actors in the family – I come from a long line of GPs.

“I was very shy and clingy when I was little, so my mum sent me to the nearest thing to drama classes that we had back then. I went to elocution lessons in Newark. I remember being set an exercise, something to do with The Wind in the Willows that was set to music and I had to mime my way out of it, it was amazing!

“I was completely transformed, removed into another world, I loved it. Then I started showing off and decided I wanted to show off for a living!”

Elizabeth started taking part in school plays and other productions at her brother’s school, as well as performing at the Robin Hood Theatre. She gained a place at the Guildhall School of Drama in London and after graduating intended to do a mix of theatre and television work. She won the Carleton Hobbs Award, which gave her a six-month contract with The Radio Drama Company and from there she moved on to theatre roles before switching to more television work following the arrival of her daughters.

“Working in theatre means you’re often away from home for so long. When my children came along, they came first – with TV it meant you were only away for a short time,” she explains.

Her first television appearance was in 1979, when she played Norah in the mini-series Testament of Youth and she’s been on our screens ever since with roles in Heartbeat, A Touch of Frost, Cold Feet, Law & Order: UK and Doc Martin to name a few.

Elizabeth has portrayed Deputy Chief Constable Andrea Wise in Line of Duty for the past two seasons. It has recently been named the biggest TV drama of the 21st century so far and Elizabeth has loved being involved, enjoying all the hype and fan theories that have been circulating in the build-up to the series finale.

Speaking of the experience she said: “It’s been amazing – really fun and exciting. It was absolutely brilliant that the show was put out one episode at a time. It meant that everybody was watching along together, no-one was ahead, there were no spoilers.

“I was at the dentist a couple of weeks ago, and even with all their implements in my mouth I refused to give any spoilers away. Even my daughter said it was driving her mad – she just wanted to know!

“It’s been really good fun. I have one of the smaller roles, so what it must be like for the three main characters, I don’t know!”

Filming for the latest series was interrupted by the pandemic, which Elizabeth says forced her to relax and take some time for herself for a while.

“The first lockdown, after the shock of what was happening, I had my daughter here, and she was a very good lockdown companion. I did a lot of work around the garden,” she says.

“I also had the luxury of knowing that two projects I was working on when we went into lockdown were likely to start up again, which made an enormous difference to me. I had some personal friends who were very much wandering around the wilderness, like a lot of people who have been unable to do nothing. I also set up a booth in my wardrobe and did some voiceover work. That was wonderful, to be able to go just upstairs rather than spending half a day getting across London.

“Not being allowed to go anywhere took the pressure and the stress off me and I loved the silence, loved the quality of the clean air. Even though we’re in the Lincolnshire countryside, everything just felt and looked clearer – it felt like we were living in HD.

“I don’t really do hobbies, but I enjoy walking, the peace and quiet of nature, reading and I’m a big listener to Radio 3. I treated myself to a bird feeder and have been watching the birds, along with the muntjac deer who comes and steals the peanuts.

“I’ve just been enjoying where I live. When I first went away to drama school, I couldn’t get over the fact that you couldn’t see the sky without craning your neck. I love the big Lincolnshire skies.”

Viewers will next see Elizabeth in True Things About Me, a one-off BBC film, alongside Ruth Wilson and Tom Burke plus she is also set to make another appearance in Casualty. She’s also worked on a short film called The Outing, which is due to be shown at film festivals later this year.

There are more projects in the pipeline too, and of course, like the rest of the nation, Elizabeth is keeping her fingers firmly crossed for another series of Line of Duty.