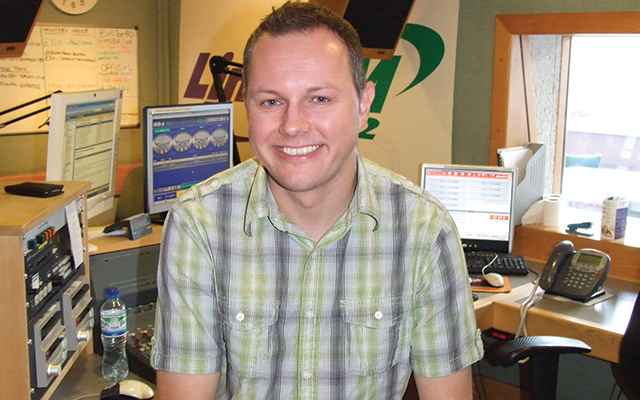 From the end of August there will be a new voice on Lincs FM’s Breakfast Show
Ed Bretten cheerfully admits to being a morning person and he has several years under his belt as a Breakfast Show presenter for KCFM in Hull. From 31st August though he will be the new voice in the morning for Lincs FM. It is an exciting return to his home city and the roots of his broadcasting career which began when he was recruited as a teenager for the BBC Lincolnshire’s Livewire team.

Ed has a home in Yorkshire but will be moving back to Lincoln because, even for him, at 4.30am, it would be a drive too far to be ready to broadcast at 6am. “I am really excited,” he explained, “to be given this opportunity. It is a real pleasure and responsibility to help people start their day.”

There is a fine art, Ed explained to welcoming the morning audience. Whatever time their day starts, listeners want to be entertained, informed, cajoled and amused and that audience will change as the four hours race by. There will be fun, new items and hourly updates on celebrity gossip. “I really enjoy meeting and interviewing celebrities whether they are from music, stage, TV or sport and Morning Juice will give listeners a regular update on all things celeb.”

The Mystery Voice will remain on the show as one of the station’s most popular competitions and the new Ed to Head Challenge will pitch Ed against head teachers from the county’s schools. Children can make their suggestions for challenges on the Lincs FM website www.lincsfm.co.uk no matter how devilish they may be!

You have heard of the power ballad, well now there will be the Shower Ballard. Ed will play your request for a song while you belt it out at the top of your voice as you bathe. If you have a birthday coming up you could take part in the Birthday Blow-Out of the candles on your cake for which you will receive an extra special present. All of this while live and on air of course.

Ed loves Lincolnshire and if he had to choose would nominate Boston as his favourite town because he spent his teenage years there. His favourite Lincolnshire food? Well it would have to be sausages, of course and his favourite part of Lincoln is uphill around Bailgate and the Cathedral. Getting up early has never been a problem for him and it is normal for him to only have five or six hours sleep a night. If he does flag mid-afternoon, a power nap soon has him bouncing around again.

So finally, what will Ed be looking forward to most about this new job? “The best thing will be that I am back amongst my family and friends,” he explained, “and I intend to be playing lots of tennis in my free time up at Eastgate.”