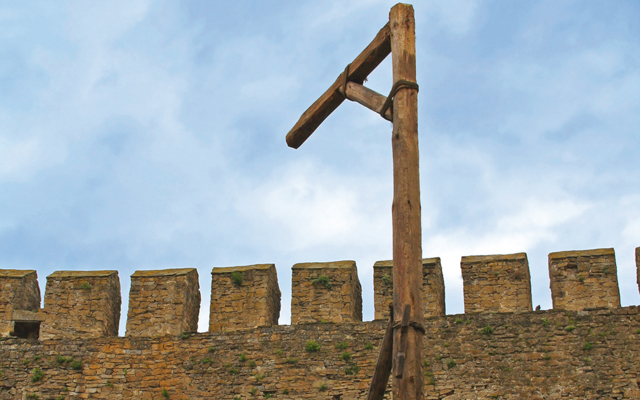 Until the early part of the nineteenth century, executions in Lincoln were carried out in public at the junction of Westgate and Burton Road. The area became known as Hangman’s Ditch.
The gallows were a simple construction, easily erected, with two vertical posts supporting a crossbeam. The condemned person was driven up on a horsedrawn cart, or tumbril, and a noose was placed around his or her neck. After the chaplain had said a few prayers the prisoner was allowed to address the crowd; sometimes displaying bravado, sometimes admitting their guilt or sometimes still protesting their innocence.

The executioner would then give the horse a whack with his whip and the wagon would jerk forward, leaving the prisoner just hanging there, choking and struggling, giving the public house opposite its name: The Strugglers Inn.

Hanging at this time was a very crude affair, death eventually being caused by strangulation, but often taking more than ten minutes to happen. Sometimes friends or relatives would hang on to their legs and pull to bring about a speedier end – hence the term ‘hangers-on’.

Sometimes those sentenced to death were executed in batches, often for very trivial offences. On 18th March 1785 nine prisoners were hanged at one time, three for highway robbery, two for stealing cattle, two for sheep stealing, one for horse stealing and one for house breaking. It was reported that a crowd of 20,000 turned up to watch this event. In April 1747, Mary Johnson was burned at the stake on the same site for the murder of her husband, a fate often inflicted on women instead of hanging. The last person to be hanged at this site was William Ward, for shopbreaking at Mareham on 1st April 1814. In 1817 it was decided that executions should be moved to a position where they could attract a larger audience than was possible in Westgate.

The roof of Cobb Hall in Lincoln Castle proved to be the ideal location. The elevated position allowed the condemned person a wonderful view of the Cathedral, but only briefly of course. It also provided a much better view of the proceeding for the crowd. In 1868 public executions were abolished by an Act of Parliament.

The last public executions in Lincoln were carried out on 5th August 1859. This was the double hanging of Henry Carey and William Picket for the murder of William Stevenson at Stickney West Houses, near Boston. After that, hangings were carried out inside the Castle grounds, in private, in a yard to the west of the courthouse. By law they were to take place in the presence of the Sheriff, the gaoler, the chaplain, a surgeon and such other officers of the prison as the Sheriff may require or allow. A chaplain is recorded as saying: “The part of my duties I dread most is the morning walk to the scaffold. The Justices expect me to bring the condemned man to penitence. I console myself that thus far I always seem to have brought comfort to the poor creatures.”

Later executions took place inside the grounds of Lincoln Prison on Greetwell Road. From 1900 to 1961, 18 executions were carried out at the prison. The last hanging there was in 1961. That was Wasyl Gnypiuk, a Polish-Ukrainian immigrant who was executed for the murder of his landlady, Louise Surgey. And finally, in 1872 William Frederick Horry was convicted of murdering his wife and sentenced to death. This was the first execution carried out by the Horncastle cobbler William Marwood, but that’s a story for another issue of Lincolnshire Life.