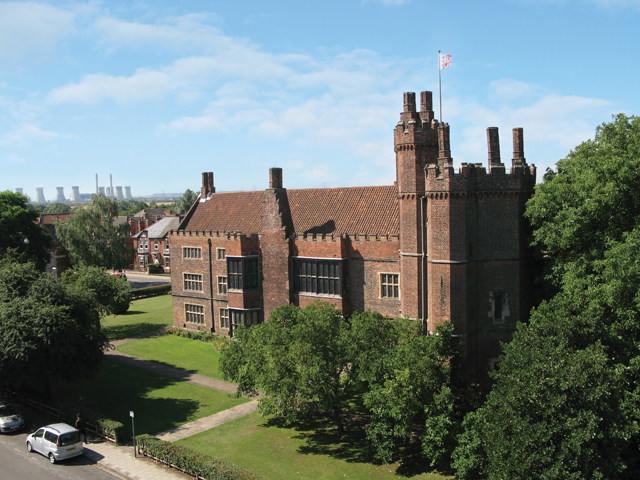 Where kings were wined and dined…

Gainsborough Old Hall was described by Simon Jenkins as a ‘textbook of medieval architecture’ in his ‘England’s 1000 Best Homes’. It is certainly among Lincolnshire’s top visitor attractions, and may be on the verge of further enhancement.
The Old Hall, which stands close to the centre of Gainsborough, is one of the best preserved timber framed manor houses in England. It was built by Sir Thomas Burgh between the 1460s and the 1480s and apart from some later alterations the fabric of the building is still substantially fifteenth-century. The hall was built in four stages starting with the great hall and kitchen. The great hall was constructed around six elaborate roof trusses and supporting piers. The process of medieval building was similar to putting together a huge three-dimensional jigsaw; each joint was individually marked and these marks corresponded so that each joint fitted its neighbour exactly. The brick-built kitchen is one of the finest examples of its type in the country. It has two massive fireplaces, one for spit roasting and one for cooking pottages. There would be a pot of soup always cooking on this second fireplace, to which vegetables would be added daily. The second phase was the east wing which provided accommodation for the family and the third was the west wing which consisted of twelve self-contained apartments. These were for guests and senior staff; each room has a fireplace and a toilet room, which included an area for storing clothes, known as a gare de robe. It had been discovered that ammonia fumes killed off any fleas or lice in clothing and also protected them from moths. Over time, gare de robe was shortened to wardrobe and the practice of storing clothes in the toilet died out. Finally in 1483, when Sir Thomas became the first Lord Burgh, he built the tower to announce his increased status. The tower has one polygonal on each of its three floors, each with a gare de robe and a fireplace. The tower also has a seventeenth-century ghost, last seen in the 1950s. Altogether there were five Lord Burghs connected with the old hall and they clearly moved in very high society. Court connections led to two royal visits, Richard III in October 1482 and Henry VIII in 1541.

The menu for the visit of Richard III is said to have included:
Pottage of stewed beef
Baked pies of calves feet
Whole side of roast beef
Boiled rabbits with puddings
Baked cranes and bustards
White puddings of hogs liver
Baked sparrow
Pestells of red deer

Minstrels played throughout the banquet and a trumpet fanfare announced the arrival of each new dish.

The hall deteriorated and in 1596 Thomas, fifth Lord Burgh died bankrupt and with no male heir. The hall was sold to a London merchant, William Hickman, who set about restoring it. The Hickmans were separatist sympathisers and a congregation from the nearby village of Scrooby, who were to form part of the original ‘Mayflower Pilgrims’ were allowed to worship regularly in the great hall.

The hall changed hands a number of times until it was bought by the nation in 1970 for £1. Now English Heritage is responsible for the fabric of the building and Lincolnshire County Council, aided by the ‘Friends of the Old Hall’ manage the day-to-day running. The county council has recently announced development plans for the site and it is hoped that a licence will soon be granted to allow civil weddings to take place there.