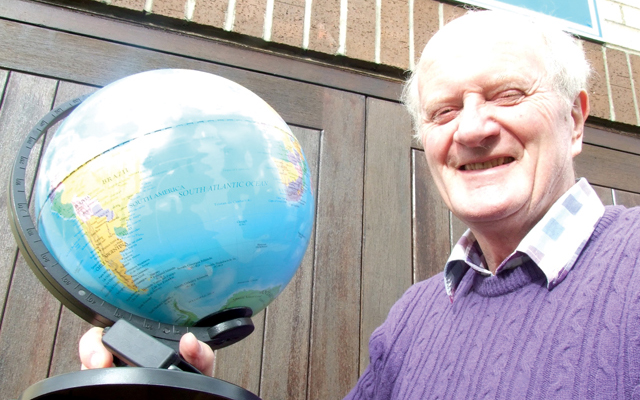 We all understand that mobile telephones and social media are powerful communication tools but a county based initiative has harnessed their power to spread a worldwide message of peace.
The peace message, which was composed by village resident Vanessa Robertson, travelled around the world by landline and mobile phone to all countries whose troops fought in the war. In three and a half hours the message was finally relayed back to the waiting audience in the hall.

“I have built a group of people who I call my network of tigers,” explained Robin Dunseath.

“They are tenacious, imaginative and generous and they have helped me to launch this idea which has now gone viral. The beauty is that it is low cost, yet so effective in building these lines and messages for peace across the world.

“In some places, more regional offshoots or Ringlets have taken place, to remember a local event or person. It has been astonishing how quickly the idea has taken off and the massive support we have built.”

Support has also come from organisations such as the Imperial War Museum and the United Nations who invited Robin to their headquarters in New York. The 2015 Ring of Peace was held on 21st September, the United Nations Day of Peace.

Robin and his collective have now been asked to take the initiative to a higher level still to mark the anniversary of the signing of the Armistice in November 2018. Already a group of five principal partners with a global presence have been identified as supporters and a worldwide competition will be held to compose the message.

The top six messages will also be sent to a songwriter who will compose a song to be recorded by an international artist. Proceeds from the sale of the song will go to charity.

Two peace dinners will also be held in London and New York to mark the occasion.

“I am looking for national and international sponsors to help our collective to plan this much larger scale Ring of Peace. There is tremendous opportunity to become involved in these early stages and a huge amount of prestige and exposure to be gained from affiliation with the event.

“We have already proved that from an initial tiny event Ring of Peace has inspired people not just on their local level but on a global scale too. The comparison I make is that this is like the Ice Bucket Challenge but for peace.”

If you would like more information about supporting Ring of Peace contact: Robin Dunseath 07770 8311728 or email: robindunseath@hotmail.com