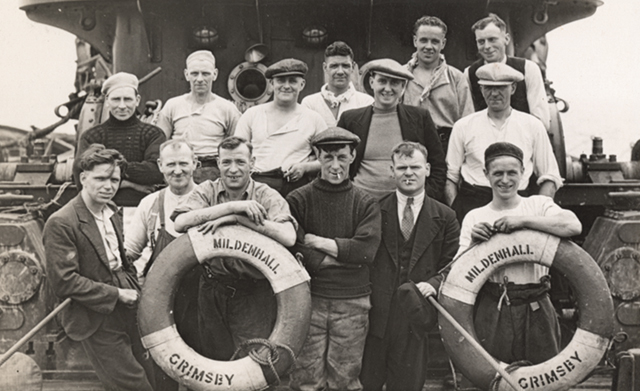 Memories, Pictures from the Past, Then and Now – all are titles using the rich vein of images which can be appreciated by a wide range of ages. Put into a book with accompanying text, they become a heritage resource. ‘Grimsby Memories’ (True North Books of Halifax in association with Total Lindsey Oil Refinery, £10.99) is more than Grimsby: it starts with Cleethorpes and includes Immingham. Sections are Street Life (including a reminder of the appalling elimination of Grimsby Old Market Place and Bull Ring), Rest and Play (parks, woods and the seaside), Days to Remember (Status Fair, VE Day and Royal visits), Darkest Hours, That’s Entertainment, In Deep Water (docks, submarines at Immingham), Moving On (transport), Fish out of Water, and Work, plus sections on sponsoring industries.

Coincidental with finding ‘Grimsby Memories’ (actually published in 2008) the postcard illustrated here came into my possession together with a photocopy extract from the Grimsby Trawler Archive. The card was never posted, has a business stamp on the back of P&S Photo Service, 70 Freeman Street, Grimsby, but somehow came into the hands of a Surrey postcard dealer.

It shows the crew of the Mildenhall, a trawler built in 1935 by Smith Dock Company on Teeside and registered in January that year to Croft Baker & Sons of Grimsby. However at the end of 1935 it was taken over by the Admiralty to become HMS Mildenhall with the pennant FY128. Then in November 1939 it was sold to the French Navy as an anti-submarine trawler and renamed L’Agaccienne. What was its eventual fate one wonders?

SUTTON BRIDGE
At the southern end of our coastline, on the Wash, is Sutton Bridge, a village and port only two centuries old. Built on reclaimed saltmarshes and with the famous Cross Keys Bridge to carry road and rail over the River Nene, it is also the site of an ill-fated and short-lived dock. The Society for Lincolnshire History & Archaeology first published a book about Sutton Bridge in 1970, with later reprints. Now Neil Wright, recently elected chairman of the society, has written a revised and expanded book, ‘Sutton Bridge – An Industrial History’, with more illustrations and including Sutton Bridge (SLHA, Jews’ Court, Steep Hill, Lincoln LN2 1LS £9.95).

Maps show how much the coastline has changed with reclamations and the text tells of the banks, particularly the Cross Keys Bank across the Nene estuary, and the complicated story of railway companies associated with links between the midlands and East Anglia. Then in 1880-81 came the inadequately constructed dock which lasted only a few weeks. The problem was that it was built on quick (running) silt and was not watertight. Once the soil either side of the lock started to subside and the water in the dock drained out, it took but a few days for the silt bottom of the basin to ooze away. The event was neatly summed up by a local writer:

SPALDING RAILWAYS
If you are a railway buff, you may be interested in ‘Branch Lines Around Spalding’ (Middleton Press, Midhurst, Surrey £15.95) which has a collection of 120 photographs, most published for the first time, with detailed captions and maps and timetables.