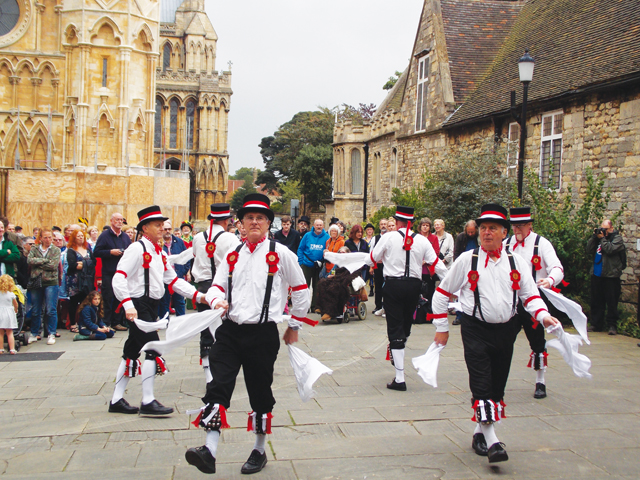 Morris dancing is one of those rare things you are either fascinated by or find boring and uninteresting.
Its origins are shrouded in mystery, although quite a number of theories exist regarding how and when Morris dancing started. Records go back as far as the thirteenth and fourteenth centuries, but there seems little doubt that the Morris tradition goes back much further than that.

Morris dancing developed differently in different parts of the country, which explains the rich diversity of styles that are seen throughout England today. What is probably not known by the majority of ‘Yellowbellies’ is that Lincolnshire has its fair share of Morris sides, which keep this very English tradition very much alive throughout the county.

One of them, Grimsby Morris Men, who are active members of the Morris Ring, will be celebrating its fiftieth anniversary in 2017, having been formed by some like-minded individuals who were around the Grimsby folk scene in 1967. This, however, was not the first Morris side from the town, where it seems Morris traditions go back even further. In 1750 the following report, dated 6th January, appeared in the Lincoln, Rutland and Stamford Mercury regarding the earthquakes that shook the region on 28th December 1749:

‘At Laceby in Lincolnshire and in several other parts of the county, as well as of the counties of York and Nottingham, the Earthquake was felt very sensibly. And at Laceby aforesaid there happen’d this remarkable story: On Innocents Day in the afternoon, several Morris Dancers came tither from Grimsby; and after they had danced and played their tricks, they went towards Alesby, a little town not far off; but, as they were going about five o’clock they felt two such terrible shocks of the Earth, that they had much ado to hold their feet, and thought the ground was ready to swallow them up. Whereupon thinking that God was angry with them for playing the fool, they returned immediately to Laceby in a great fright, and the next day home, not daring to pursue their intended Circuit and Dancing.’

This is the one and only mention of a Grimsby Morris side from any archived material that the side’s historian and archivist, Ian Horsley, can find prior to the team being ‘re-established’ in 1967.

The late Stan Compton was the instigator of the formation of a team which got together to perform what was meant to be a one-off Morris dance at a meeting of the Grimsby Folk Song Club, which met regularly at the now defunct ‘Lifeboat Hotel’ on Kingsway, Cleethorpes. This was in December 1967 – the rest, as they say, is history and four decades later the team is still going strong. Two of the members of that original bunch are still among the current team. These are Glen Osbourne and John Ide, who, both older but not necessarily wiser, and both having had long sabbaticals, have decided to once again strap on the bells.

Currently, the side performs two distinctly different styles of dancing. Throughout the summer months it is the very sedate Cotswold tradition, which is danced mainly with handkerchiefs, to tunes played on a pipe and tabor. As its name suggests, this style of dancing comes from the area of the Cotswolds around northern Oxfordshire. It is thought to be of Roman influence and celebrates spring and the coming of summer. For this, the side wear white shirts with red ribbons on the sleeves, black knee britches with braces, top hats bedecked with red, black and white ribbons and bell pads, again bedecked with red, black and white ribbons over white hose.

During the winter months the somewhat darker Morris of the Border tradition is danced. Owing to the side’s boar emblem, they refer to it as ‘Boarder’. This style is from the English-Welsh border area and is thought to be of Celtic influence, which celebrates winter. The side, for this tradition, put on multi-coloured rag coats (reminiscent of traditional Lincolnshire Plough Jags), odd coloured socks and have their faces brightly painted. This is the more pagan tradition which involves a great deal of stick clashing. However, the side still wear the bell pads, bedecked with red, black and white ribbons – traditionally the colours of Grimsby – strapped to their shins.

The ‘Grimsby Boar’ is the symbol of the side. It reflects Grimsby’s great boar hunting tradition, and their ‘hobby boar’ Stanley (named in honour of Stan Compton) is often seen wreaking havoc among both young and old, whilst the side are dancing.

The side also perform traditional Lincolnshire ‘Plough Plays’ over the Christmas period, which they take on tour around the local hostelries whilst collecting for the charity of their choice. Traditionally ‘Plough Plays’ were performed by agricultural workers who used to call at big houses, dragging their plough with them and performing these plays to supplement their winter income. It did have a darker side though; if the owner of the house was not forthcoming with payment, invariably the ‘Plough Boys’ would plough up their lawns, leaving deep furrows. Grimsby Morris Men would like to point out that they do not practice this, as it would probably now be classed as criminal damage, but mainly because they don’t have access to a plough!

Grimsby Morris Men are very supportive of local charities and over the last few years the side has collected considerable sums of money for FLAG (Family Links Around Grimsby), St Andrews Hospice, the Stroke Association and the Pink Rose Appeal at The Princess Diana Hospital, Grimsby. Their traditional Boxing Day tour around Grimsby and Cleethorpes, at which they dance at various public houses – again collecting for charity – and the celebration of the now customary two ‘Waes-hal’s’ in early January have become regular dates in a number of people’s diaries, with folk coming from as far afield as Chesterfield and Essex to help the side celebrate traditional English events.

During the summer months the side also carry out a ‘Water Pump Blessing’ tour around local towns and villages, where they dance and collect contributions towards the charity Water Aid, which aims to provide fresh drinking water for people in the Third World.

During the history of the team, well over 100 different individuals have danced the Morris with the team. Countless dance venues have been chalked up and thousands of pounds collected for different charities.

So why do they do it? As they will tell you it is mainly because they enjoy it for what it is, keeping an old tradition alive and that is worth preserving. It also keeps them fit and then there is the social side with the odd ‘pint or three’.

Grimsby Morris Men are currently planning events for their ‘Golden Year’ which will include an exhibition at the Museum of Lincolnshire Life, a mass dance out in Grimsby and Cleethorpes, a celebration feast for members and ex-members and many other events and celebrations.

They are always looking for new members and they meet every Monday evening at Park Methodist Church Hall, Durban Road, Grimsby from 8pm to 10pm.

For further details contact the Bagman, Nick Booth on 01472 699513 or you can check out their website www.grimsbymorrismen.org.uk

SOME FASCINATING FACTS (OR OTHERWISE) ABOUT MORRIS DANCING
• The original object of wearing bright clothing was to assist the sun in its efforts to promote growth.
• The bells are worn to ward off evil spirits.
• Hankies represent shrouds. They are grasped and pulled upwards to awaken the dead, then waved to dispel the evil and welcome new beginnings.
• Sticks represent mock sword fighting and beating the devil.
• Dancers dance towards each other to contain evil, then dance away to radiate joy and well-being.
• The dancers dance across the set to show all is clear, safe, wholesome and righteous.