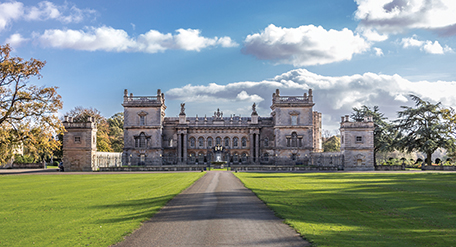 It lies within a 3,000 acre park of rolling pastures, lakes and woodland landscaped by Lancelot ‘Capability’ Brown.
Grimsthorpe has been the home of the Eresby family since 1516, when it was granted by Henry VIII. The present owner is Jane Heathcote-Drummond-Willoughby, 28th Baroness Willoughby de Eresby, granddaughter of Nancy Astor, who died at Grimsthorpe in 1964.

The building was originally a small castle on the crest of a ridge on the road inland from the edge of the Lincolnshire fens towards the Great North Road. It is said to have been started by Gilbert de Gant, Earl of Lincoln, who was the first and last in the creation of the earldom of Lincoln. He died in 1156.

Gilbert’s heyday was also the peak of castle building in England, during the Anarchy. It is thought that the castle was built around 1140.

The tower at the south east corner of the present building is usually said to have been part of the original castle and is known as King John’s Tower. Gilbert de Gant spent much of his life under the control of the Earl of Chester and Grimsthorpe is likely to have fallen into his hands when Gilbert died, though the title ’Earl of Lincoln’ reverted to the Crown.

In the next creation of the Earldom in 1217, it was Ranulph de Blandville, 4th Earl of Chester (1172–1232) who was ennobled with it. It would appear that the title, if not the property, was in the hands of King John during his reign, hence the name of the tower, perhaps.

The park was originally the southern edge of the great Lincolnshire forest and its deer park and Tudor oak park are crossed by fine avenues of trees. Oak trees, some of which were recorded in the Domesday Book of 1068, were growing in the park in the early 18th century. Some were still alive into the 20th century. The present Grimsthorpe Castle park was designed by ‘Capability’ Brown in 1771.

The garden contains a knot garden, hedged rose gardens, a terrace with herbaceous and shrub borders as well as a summerhouse designed Sir John Vanbrugh.

The formal flower and topiary garden leads into the woodland garden and onto the ornamental vegetable garden and orchard, created in the 1960s by the Countess of Ancaster and Peter Coates.

In the 19th century, the 1st Earl of Ancaster had a keen interest in technology and attempted to improve the estate in various ways. He organised an early demonstration of steam ploughing and built a private railway, the Edenham and Little Bytham railway, with stations at Grimsthorpe village and Grimsthorpe Castle.

In the First World War, Grimsthorpe Park was used by the Royal Flying Corps and the Royal Air Force as an emergency landing ground. During the Second World War part of the park was used as a bombing range.

In 1944 the castle housed a company of the Parachute Regiment while it was recovering from operations in Italy and was later used for training for what was to become Operation Market Garden.

Grimsthorpe Castle and Gardens are normally open to the public and are well worth a visit but, unfortunately, are closed at the moment due to Covid-19.