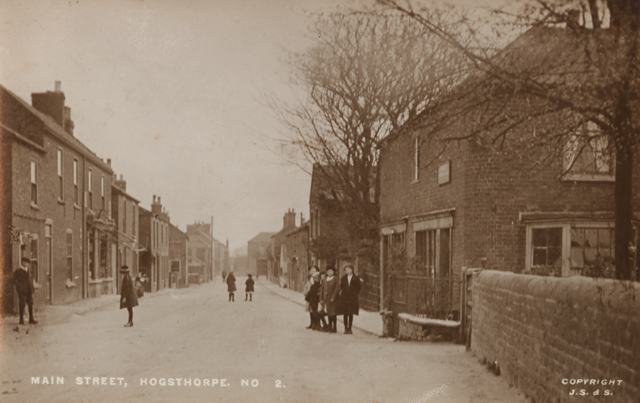 Have you been to Hogsthorpe?

Sir Cyril Osborne was MP for Louth from 1945 to 1969. He was one of the first MPs to visit Russia, and recounted his experience to village groups in the constituency. On one occasion he was in Mumby, a couple of miles along the road from Hogsthorpe to Alford. Taking tea with them afterwards, an old farm worker was listening to more tales. Then he tapped Sir Cyril on the knee and said: “Aye, but ‘ev yer ever bin to ‘Ogsthorpe?”

When most of the 250 people living in Mumby between the wars had worked on farms, a short trip to the larger village of Hogsthorpe would have been an event of significance. So, what was Hogsthorpe like when this postcard photograph was taken in the 1920s? Hogsthorpe was more than twice the population of Mumby, although it had declined from 590 in 1911 to 510 in 1921; there were twenty-three farmers (five of them farming more than 150 acres), and half a dozen smallholders. There was a mixed elementary school for up to 128 children under Master, William Wood, two chapels – Wesleyan and Primitive; no ministers lived in the village but there was a Baptist minister, Rev James Pope-Smith. The church of St Mary had ‘sittings’ for 400 and the vicar, Rev Arthur Drake, had held the living from 1897.

There was a pub, the Saracen’s Head, landlord, Robert Falkinder, and a beerhouse, a Post Office (George Young) letters delivered from Alford, a motor bus service operated through the village from Chapel St Leonards on Tuesdays to market day in Alford, picking up at 9.30am and returning at 3pm, and by 1926 there was a Police Station in the village.

However, what marked Hogsthorpe’s importance in the Marsh was the range of shops and services: a baker (William Peacock), a butcher (Walter Wright and later Herbert Wilkinson), two boot and shoe makers/repairers (Edgar Elliott and Edward Maddison), two blacksmiths (Jainey Bros and Thomas Stones), a confectioner (Walter and his son William Evison), three grocers (John and William Fowler, George Stones and Robert Wright), a joiner (William Carrott), a bricklayer (Reginald Horton), a plumber (David Ranson) and a wheelwright (Thomas Parish).

Other services were those of a surgeon, (Thomas William Livingstone Boulton – how did he get the third Christian name?), a hairdresser, (Archibald Hancock), together with a cycle agent, (Claude Evison), a hardware dealer, (William and his son Charles Neal), a basket-maker, (John Clark), a coal merchant, (Robert Hyde), an insurance agent, (Harold Coupland) and a corn grinding windmill run by Fred Blanchard.

This is the sort of illuminating information which can be gleaned from county directories, bringing life to the daily activities behind the static children out of school posing on Main Street for the photographer.

Unfortunately there are no directories today to show how many of the names are still in the village.