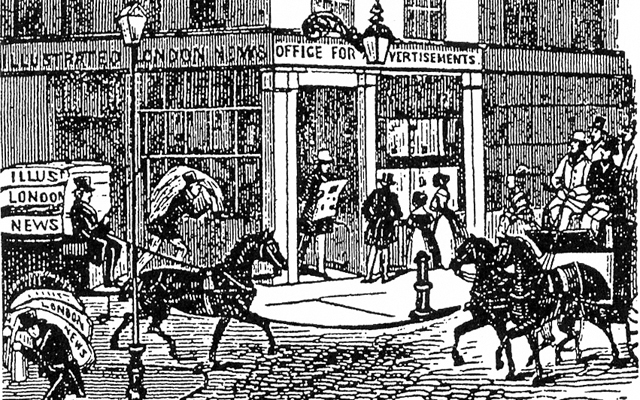 The founder of one of the most successful newspapers in his time, a parliamentarian and reformer, Herbert Ingram is one of Boston’s most respected sons.
Herbert Ingram was born in Paddock Grove, Boston in 1811, the son of a butcher and was educated at Laughton’s Charity School and the public school in Wormgate.

On leaving school at the age of fourteen, he was apprenticed to Joseph Clark, the local printer. When he completed his apprenticeship he moved to London to work as a journeyman printer. In 1834 he started his own printing and newsagents business in Nottingham in partnership with his brother-in-law, Nathaniel Cooke. As a newsagent he noticed that when newspapers included woodcuts, sales increased. A business idea formed in his mind but he did not have sufficient funds to start the venture.

However, he eventually met a descendant of Thomas Parr who, it was claimed, had lived to the age of 152 and attributed his longevity to a vegetable pill of his own creation. Ingram bought the recipe to this pill and set about creating a story around the legend of Thomas Parr. The pills were marketed as Parr’s Life Pills and sold together with an explanatory leaflet entitled, ‘The Life and Times of Thomas Parr who lived to be 152.’

The pills were a huge success and provided the capital to launch the pictorial newspaper. Emboldened by this success, Ingram moved back to London and after a discussion with the editor of Punch, he decided to start his own magazine,

The Illustrated London News (ILN). The first edition appeared on 14th May 1842, priced at six old pence. The magazine had sixteen pages and thirty-two woodcuts and was aimed at a broadly middle class readership. It included images of the war in Afghanistan, a train crash in France, a speed-boat explosion in Canada and a fancy dress ball at Buckingham Palace. The pictures were regarded as being as important as the text and the magazine declared its intent to ‘bring to the public, the very form of events as they transpire.’

Ingram was a staunch liberal who favoured social reform and although the magazine claimed to be non-partisan, his reformist views were there for all to see. The magazine was an immediate success, the first edition selling 26,000 copies. Within a few months it was selling 65,000 copies a week. Rival papers started up but Ingram saw them off and bought them out. He employed leading artists of the day to illustrate the big news stories and social events from around the world.

The magazine did very well during the great exhibition of 1851 and the edition that reported the funeral of the Duke of Wellington in 1852 sold 250,000 copies. By 1855 Ingram was using colour and soon the ILN was selling over 300,000 copies a week, when The Times sold only around 70,000.

In 1856 Ingram became the Liberal candidate in a by-election in Boston and with the help of Punch and the ILN won an overwhelming victory. In Parliament, he was instrumental in bringing the railways to Boston and forged new links to the rest of the country. He also played a major part in supplying fresh piped water to the town, a move which was met with rejoicing and brass bands when the taps were turned on for the first time.

In 1860 Ingram went to the USA with his eldest son. On 8th September they were aboard the Lady Elgin on Lake Michigan when the ship collided with another vessel and sank. Herbert Ingram, his son and hundreds of other passengers were drowned. Ingram’s body was brought back to Boston where it was buried in the cemetery on Horncastle Road. Today, there is a statue of Ingram in the Market Place in front of Boston Stump.