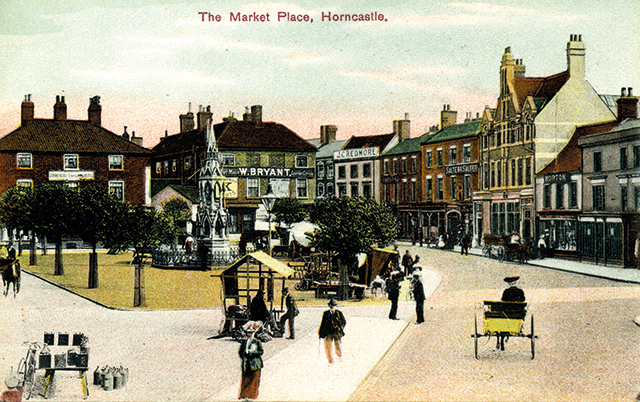 Alan Middleton considers some of the key features and events that have shaped this delightful market town.
The name comes from the Saxon ‘Hyrnecastre’, meaning ‘fortress in the corner’. This refers to the original location of the walled Roman settlement on a corner of land at the confluence of the rivers Bain and Waring. The Roman settlement appeared in the 1st century once Lincolnshire was under the control of the 9th Legion.
The wall, constructed in the 4th century, was 11–13ft thick and enclosed an area of roughly five acres. It was built of Spilsby sandstone.

The best preserved remains can be found in the library on Wharf Road. A section of the western wall forms part of a brick wall at the back of the Community Centre on Manor House Street and is marked by a blue plaque. Part of the remains of the northern wall is visible inside the property of Jabberwock Books in St Lawrence Street. Four miles east of Horncastle is the tiny village of Winceby. During the English Civil War in 1643 the Battle of Winceby helped to secure Lincolnshire for Parliament and Oliver Cromwell was almost killed. It was a decisive battle.

A key feature of any market town is, of course, the market place and in Horncastle’s there stands a stone monument with plaques bearing the portrait and arms of Edward Stanhope, who was MP for Horncastle and who held government posts under both Disraeli and Lord Salisbury.

In days gone by Horncastle was most famous for its Horse Fair. Held in August and centred on the market place it was once the biggest in the UK. The fair attracted people from all over Europe and was said to have been especially popular with gypsies. It also had a reputation for attracting more than its fair share of rowdy and drunken behaviour. Many private houses jumped on the bandwagon, selling beer and wine from their front windows, with no licence, much to the annoyance of the authorities.

In a corner close to the market place once stood Sellwood House, home of Emily and Louisa Sellwood, daughters of a Lincolnshire solicitor and nieces of Sir John Franklin. In 1836, at Horncastle church, Louisa married the poet Charles Tennyson Turner, then curate at Tealby. He had earlier taken the additional name of Turner, that of a great uncle who had bequeathed him some property. Emily was bridesmaid and Alfred Tennyson best man, and it would seem that in this joyous atmosphere they too fell in love. It would be many years before the success of Alfred’s poems made marriage possible. Lord Tennyson would often say to his children, “The peace of God came into my life at the altar, the day I married Emily Sellwood of Horncastle”.

Sellwood House was replaced by a building which initially housed Woolworth’s and is now home to Heron Foods. The horse fair is no more, having ended in 1948. Horncastle is probably best known now as a centre for the antiques trade.