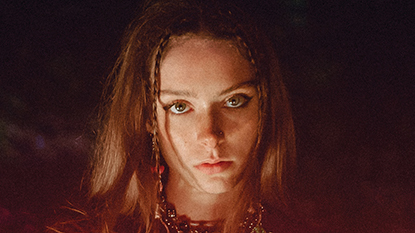 Holly is ready for the next stage

It’s been a tough year for the arts with the majority of live performances cancelled, but for singer/songwriter Holly Humberstone there has been plenty to smile about – especially after she was tipped as one to watch in 2021.
Grantham-born Holly placed second in the ten-strong list of artists nominated for the prestigious BBC Sounds of 2021 poll, compiled by a panel of industry experts, which highlights the most exciting new talent in British music.

The nomination comes off the back of an exciting period for the 21-year-old, who in 2019 was thrilled to play on the BBC Introducing stage at Glastonbury. Later the same year she toured Europe with singer Lewis Capaldi, supporting him at Wembley Arena among other venues.

“I was so excited when the poll was announced – I always thought if I made it on to the BBC Sounds poll it would be the best day of my life,” says Holly, who describes her music as dark, alternative wonky pop. “There’s been some amazing musicians on there over the years, people that I have really looked up to.

“I remember thinking when my first single was released at the start of 2020 it would be amazing to make the poll by the end of the year – but I never thought it would actually happen!

“I am so grateful for all the support that I have received from the BBC, and everyone who has reached out to me. I’m so excited – I can’t wait to get back out there and start meeting people again and go on tour myself.”

Holly – one of four sisters – grew up on the outskirts of Grantham, where she says her childhood home was filled with creative arts and music.

“We grew up in the countryside around Grantham, we didn’t really have any friends living nearby, but fortunately we were all very close in age and played with each other, and we’re still very close today,” she adds. “We were quite free as children – we did lots of creative stuff; my parents exposed us to lots of music and poetry and also really encouraged me to do art. The whole house was very much a creative mess!”

Holly’s passion for music in particular developed further when she took lessons at school, initially focussing on the piano, before teaching herself to play the guitar when she was 17.

“I really loved learning to play the piano and I loved to make little songs up and play them to my parents, who were really encouraging – and basically I’ve never stopped!

“Then I decided to teach myself to play the guitar too. I cannot really read music; I just play what sounds good!

“Earlier on I was writing a lot of piano ballads, as I tried to discover who I was musically and wrote my first EP – now I’d describe my sound more as dark, alternative wonky pop.”

Holly says there wasn’t really a definitive point where she decided to make music her career, it all happened organically after she uploaded some of her songs to a website for her friends to listen to.

“It was always a hobby; I wasn’t really thinking about making it a job – I suppose the pivotal point was in summer 2017,” she recalls, “that’s when I started to record some of my demos at home and I uploaded them on a website called SoundCloud for my friends, and they just went around my friendship group and they really loved them.

“One of my friend’s dads used to be in a band and suggested I apply to BBC Introducing – I had nothing to lose so uploaded some of my tracks to the site and they came back to me within a week. The support I’ve had from the BBC from day one has been great.”

It was Holly’s track ‘Hit and Run’, inspired by the film Baby Driver, written after she watched it at the cinema, which piqued the BBC’s interest and led to her performing at the legendary Glastonbury Festival on the Introducing stage in summer 2019.

“I’d played live at the Jam café, in Nottingham, and done open mic but they were much smaller sessions – more a room, where people were there just to have a drink and a fun time.

“When I played Glastonbury, it was the first time I’d ever been there, it was huge and amazing – I would definitely love to go back.

“At the start of 2019 I was doing smaller UK support tours with rooms of up to 2-300 people and then I got to play Wembley, which was huge. I was doing my own sets on my own, but it was a great way of gauging feedback and seeing how the crowd were reacting to my songs. Coming off that tour, I realised that’s what I wanted for myself.”

Although this year has been disappointing with no live events, Holly has still been busy working, launching her debut six-track EP – Falling Asleep at the Wheel – while writing new material.

The EP was launched in August and featured three new tracks alongside Holly’s critically acclaimed debut singles, ‘Deep End’, ‘Falling Asleep at the Wheel’ and ‘Overkill’.

Holly takes her inspiration from everything around her and cites artists including Bon Iver, Damien Rice and Radiohead among those who’ve had an impact on her own music.

“With my first EP I was just trying to figure out who I was musically, where I fitted in, I’m so excited for my next one and for people to hear my new stuff,” she said.

“Everything goes into my music – my own relationships with friends, romantic ones, things that are going on around me in the world, I just take inspiration from everything.

“Despite everything, this year has been really good for me, there’s been the opportunity to chill out and it’s been nice to have some time off and hang out with my family.

“I’ve got a tour planned for later this year, and I’m really looking forward to playing some summer festivals too – there’s lots to look forward to.”