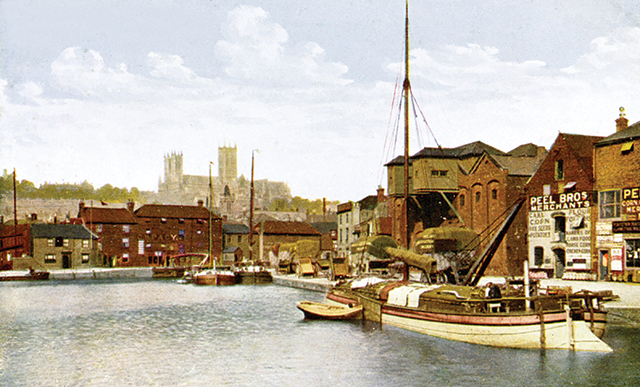 In this issue Alan Middleton takes a look at Victorian Lincoln and Lincolnshire in the middle of the 19th century. Although the working classes have not yet secured the vote, they are very gradually at least starting to be noticed, having been invisible for centuries…
The trade unions are also just starting to be watched closely. Agricultural expansion has passed its peak and for the first time, more than half the people of Britain are living in towns and cities. Horse traffic has been overtaken by railways. The slow moving barges still bring their cargoes up the river Witham and the Fossdyke canal to Brayford Pool, but their sails are being challenged by the power of steam.

Before the middle of the century the Midland Railway Company’s extension from Nottingham to Lincoln has been opened, the Sheffield to Lincoln line has been completed and the York to London line, through Lincoln has linked the city to the capital and Lincoln’s virtual isolation of centuries, except by waterway, has been ended.

Agricultural wages are low, a labourer typically earning ten shillings a week (50p) and conditions for working people are harsh with none of the luxuries most of us take for granted today. For those in work the days are long and hard and even then, every penny they earn is spent on basic living expenses. In the shops they pay high prices for goods of often doubtful quality. A pound of tea costs four shillings (20p) but you can get a gallon of ‘good table beer’ for three old pence (just over 1p), so the problem of cheap alcohol pricing is not a 21st-century phenomenon.

The controls and hygiene regulations which are in place today are non-existent then. Pure and unadulterated food is rarely available to working people, certainly not at prices they can afford. Flour is often diluted with chalk, tea with sawdust and butter, if you can get any, is invariably rancid. Weighing scales are frequently tampered with and, as a result, people get short measure. In today’s language, we would say, customers were being ‘ripped off’ by unscrupulous shopkeepers. Those out of work have no choice but to resort to the Above Hill or Below Hill soup kitchens. There is a strong temperance movement led by the Lincoln Temperance Society and an American revivalist, Rev J Caughey is preaching to overflowing congregations.

The population of the City is just over 20,000 and growing rapidly as many workers are attracted from the countryside to the new engineering factories in search of higher wages. Politically, the city is generally inactive. The representation in Parliament by members of a local family, the Sibthorpes, had continued for many years, but the line was broken in 1861 by the death, at the age of 45, whilst on a fishing trip, of Major Gervaise Tottenham Waldo Sibthorpe, who had succeeded his father in 1856. He is described as a ‘Liberal Conservative’. George Fieschi Henage is the city’s other member.

There is, of course, no radio or TV. A walk around the south or west common or a stroll along the river bank or Fossdyke canal may appeal, followed by a picnic. Some may choose to watch the prizefighting on Pyewype Green, but this pleasure is often halted by police before the bout is over. Other sporting possibilities include the annual cricket match between an England XI and the Lincoln District team on the Lindum, or the annual regatta on the Brayford or horse racing on the Carholme. It all seems a far cry from life in Lincolnshire today and of course, it was.