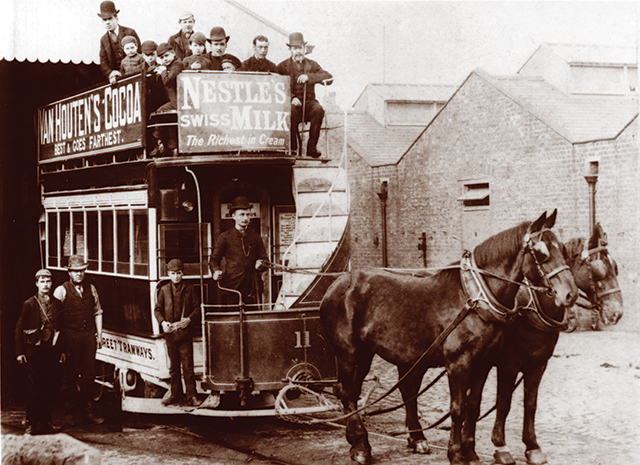 Lincoln had operated a horse tram service from 1882 to 1905 and an electric tramway service from 1905 to 1929. The first motorbuses were purchased by Lincoln Corporation in 1920. They were a batch of eleven Dennis CAB models, normal control saloons with solid tyres.
The handsome bodies were built by LL Motor Bodies of Louth and were of the rear entrance layout seating twenty-six passengers. Slatted wooden seats were fitted forward and aft of the bulkhead thus dividing the saloon into two compartments with twelve seats in the forward section and fourteen in the rear.

The driver’s cab extended to the full width of the vehicle with a door on each side and one in the bulkhead through to the saloon. An extra seat was fitted alongside the driver and it was a rare treat for any schoolboy (rarely girls) to be allowed to ride ‘up front’ with the driver.

Large route number boards were fitted on the roof at the front and rear with the destination names also displayed on boards below the side windows. The fleet livery was light green body panels, cream window frames, white roofs and black mudguards. Large gold leaf fleet numbers, shaded in black, were applied and the company title, ‘City of Lincoln Omnibuses’ also in gold appeared along the body side panels.

Route 3 to Monks Road started in February 1921 and ran via High Street, Silver Street and Monks Road, terminating at Hartley Street, but the route was later extended to the end of Monks Road. In March 1921 a trial service to Wragby Road started running on Fridays and Saturdays only, to serve the new St Giles estate that was being built in the northeast part of the city. The trial proved successful and by July 1921 Route 5 to St Giles was operating six days a week. Housing development was taking place in the southern part of the city in areas around Newark Road, Skellingthorpe Road and Doddington Road.

Twelve new vehicles were added to the fleet from 1925 to 1927. These smart little twenty seaters, with bodies built in Lincoln by Bracebridge Motor Bodyworks, introduced one-man operations to the city for the first time and they were soon running on Route 4 to Doddington Road Bridge at its junction with Newark Road, via Boultham Park Road and Rookery Lane. For a number of years an independent bus operator, Mr Corten, ran a service to Skellingthorpe village and also served Swanpool Garden Suburb.

Lincoln Corporation eventually took over the business and Route 6 began operating, but only as far as Swanpool.