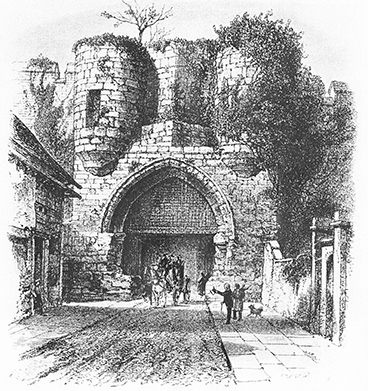 After William the Conqueror defeated King Harold at the Battle of Hastings in 1066, he continued to face resistance to his rule in the Midlands and north of England. For a number of years, William’s position was very insecure. In order to project his influence northwards and to enable him to control the people, he constructed a number of major castles, including Cambridge, Huntingdon, York, Nottingham, Warwick and Lincoln.

When William reached Lincoln, already a major settlement, he found a Viking commercial and trading centre with a population in excess of 6,000. The remains of an old Roman walled fortress, located in uphill Lincoln, high above the countryside to the south and west, proved an ideal position to build a new castle. Lincoln was also a vital strategic crossroads on a number of routes, no doubt the same factors which influenced the siting of the earlier Roman fort.

Fosse Way, another important Roman route connecting Lincoln with the City of Leicester and beyond that the south west of England.

The valley of the River Trent to the west of Lincoln, a major river giving access to the river Ouse and the City of York.

The River Witham, a waterway connected, via the Fossdyke Roman canal, to the river Trent at Torksey and to the North Sea, via Boston and the Wash.

A castle here could guard several of the main strategic routes and form part of a network of strongholds of the Norman Kingdom, in the former Danish Mercia, roughly the area known today as the East Midlands and from there control the rest of the country. The work was completed in 1068.

The castle was the focus of attention during the first Battle of Lincoln in 1141, during the struggle between King Stephen and Empress Matilda, also known as Empress Maude, over who should be monarch of England. Fifty years later, under the leadership of Lady Nicola de la Haye, the castle withstood a 40-day siege by Richard I’s chancellor, Longchamps, when he demanded the loyalty of supporters of the King’s younger brother, Prince John.

Nicola, in her own right as Constable, defended the castle again in 1217, during the civil war that followed King John’s refusal to honour Magna Carta in 1215. Lincoln Castle was besieged for the final time in 1644, during the English Civil War, when the Royalists holding it were overwhelmed by a mightier Parliamentary force.

The red brick Victorian prison was built in 1848 to implement the ‘separate system’, a regime intended to keep prisoners separate from the corrupting influence of their fellow inmates and bring about their moral reform. The ‘separate system’ was never fully implemented and the prison closed after about 30 years. The prison building, however, housed not one but two Magistrates’ Courts until 1990, the Lincoln Lindsey and Lincoln Kesteven Courts.

In addition, the fine Gothic revival building close to the West Gate is still in use as Lincoln Crown Court. From 2010 to 2015 the castle was the subject of a major £22m research and renovation project, funded by the Heritage Lottery Fund, Lincolnshire County Council, the European Regional Development Fund, the David Ross Foundation and private donations. This involved the restoration of the castle’s curtain wall and the creation of a new medieval wall walk on top of the castle’s ancient ramparts, restoration of the Victorian prison and the building of a new vault to house Magna Carta and the Charter of the Forest with a widescreen cinema for showing films about the documents. It is now one of the best preserved castles in England.