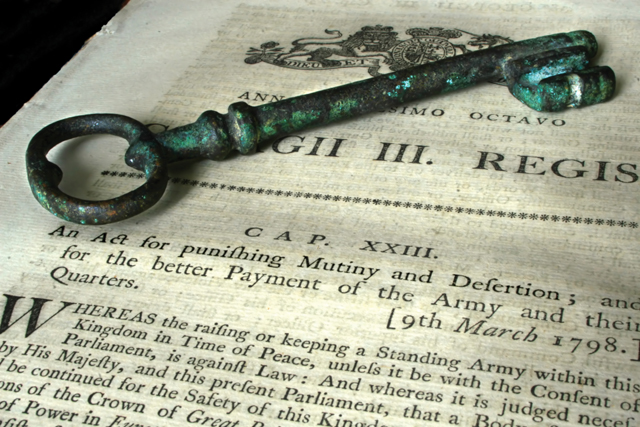 There had been much criticism of the Lincoln Courthouse and Gaol over the years due to the appalling conditions in which prisoners were held. For many years the Justices had met in the Guildhall over the Stonebow with the City Gaol adjacent, when the great prison reformer, John Howard, in his state
of the Prisons report of 1777, commented on conditions:
“One large room upstairs for men debtors, one smaller for women. The rooms for criminals are two dungeons down three steps with bedsteads that they may not sleep on the damp earth floor. There is no courtyard, no water accessible to prisoners, no straw.”

The situation appears to have improved little by 1800 and the gaol became notorious for its failure to provide humane conditions, although water and a privy were now available. It was against this background and the scandal it caused, that a new courthouse and prison was commenced in 1805 at the junction of Lindum Hill and Monks Road. The building was completed in 1809 and the first courts sat in July. However, the problems were far from over and the new building became the target for further criticism, with debtors, prisoners and those untried or convicted being locked up in the same room. The courthouse was also said to have been very inconveniently planned and unfit for its purpose.

This obviously inadequate building was demolished after only thirty-three years and a new courthouse and prison, the present Session House, was opened in 1844. The building, which cost £4,785, (equivalent to nearly £400,000 today) was erected by Marshall of Hull. The prison part continued in use until 1878 when the new jail on Greetwell Road was opened; the courts continued until 1990.

By the 1930s the Sessions House was again being described as inadequate, but by the 1970s the problems were becoming more acute, with the need to separate defendants, witnesses and justices being highlighted. In addition, the lack of accommodation for solicitors to meet their clients and no comfortable space of any kind where people might wait before being called were also issues. Various ideas were considered, including extensions to the Session House, but by 1973 it was obvious that the only real solution was a new courthouse.

Nothing much happened except talk until 1986, when plans were approved for a new courthouse on the east side of High Street, on the old railway sidings and coal yard. Work started in 1988, the foundation stone was laid by Lord Lane, the Lord Chief Justice, on 14th February 1989 and the building was completed in 1990.

In the 1970s there were two other magistrates’ courts sitting in Lincoln. In addition to the City Bench, the Lincoln (Lindsey) and Lincoln (Kesteven) Benches sat at the Castle. The latter two came together to form the Lincoln County Bench and all three joined forces in 1990 and became Lincoln District Bench.

A brand new courthouse, offering twentieth/twenty-first century facilities was opened by the Prince of Wales on 20th November 1990. The old Sessions House is now part of Lincoln College.