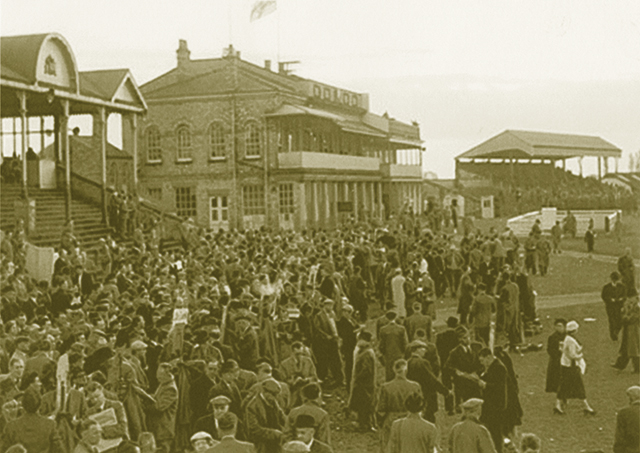 The earliest reference to horse racing in Lincoln appears in the Register of Acts of Lincoln Corporation dated February 1597, which reads ‘the Mayor’s charges for a scaffold at the horse race to be allowed’.
The scaffold, which was the first crude grandstand, was the type of structure from which King James I stood to watch ‘a great horse race’ on Lincoln Heath, an area of common land between Waddington and Harmston, on 3rd April 1617. By 1669 racing had become so popular that ‘persons of honour and quality’ were said to be attracted and there were calls for the event to be held annually, but this did not happen until 1680.

The quarter-mile course on Lincoln Heath was, according to local records, railed and corded with ropes and stoops on both sides, whereby the spectators were kept out and the horses were seen from a distance. The meeting continued to be staged at this site, now the home of RAF Waddington, until 1773 when it was moved to the West Common and it was then that racing really started to take off in Lincoln.

Initially the Carholme meetings were somewhat parochial but in 1806 a race of rather more consequence was introduced to attract stables from further afield. The Gold Cup, valued at 105 guineas was held on the last day of the meeting. Prior to the first grandstand being built in 1826, few facilities were on offer to spectators; only the really well favoured were sheltered by canvas or temporary wooden structures.

The racecourse atmosphere in many parts of the country was carnival in style and ‘all the fun of the fair’ was on offer. There was Punch and Judy, wild beast exhibitions, fat ladies and knobbly knees competitions, together with a range of fairground type stalls. But Lincoln took its racing seriously and the meetings were rather more dignified. Some claimed at the time that this was due to the influence of the Church Authorities, who discouraged too much frivolity. Nevertheless the meetings proved to be hugely popular, attracting riders and spectators from miles around and, as it was held on common land, admission was free.

A great deal of money changed hands at a race meeting and this naturally attracted some undesirable elements. Pickpockets were always amongst the crowd and there were questions about the honesty of some of the bookmakers. By the middle of the nineteenth century there were several race meetings in Lincoln each year, the most important being the Lincolnshire Handicap established in 1849. This race originally took place in August over a distance of two miles.

In the spring of 1853 a new race was introduced, the Lincoln Spring Handicap, run over a mile and a half, but this was later reduced to one mile. In 1857 the August meeting was discontinued and the spring event became the main feature, at which point the Lincoln Spring Handicap was renamed the Lincolnshire Handicap. The high point for racing in Lincoln was the early part of the twentieth century. An area close to the finish line had been enclosed and spectators were charged two shillings (10p) for admittance.

The fortunes of the racecourse started to decline after World War II, it needed investment but there was no money available. It struggled on for a while but then the Jockey Club decided not to grant any fixtures to Lincoln after 1965 and the Horserace Betting Levy Board said it would withdraw its financial support in 1966. The City Council were reluctant to pull the plug but felt they had no choice. The last Lincolnshire Handicap was run on 18th March 1964.