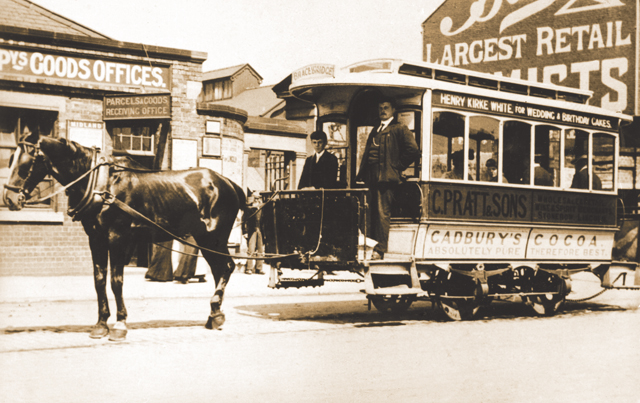 The Lincoln Tramway Company was established in 1880 with share capital of £20,000 and operated a horse-drawn tramway service in Lincoln from 1882 to 1905.
The company originally had ambitious plans for a substantial network of lines around the city, but in the event only one line was built, from Bracebridge to St Benedict’s Square.

The depot in Bracebridge was at the corner of Newark Road and Ellison Street. The building, which became known as the Tram Stables, survives to this day and is now home to HSL, the chair specialists. Major General Hutchinson from the Board of Trade inspected the system on 6th September 1882 and after a few minor adjustments to the track in High Street it opened two days later.

The full journey took twenty minutes and comprised two stages at one penny each; the interim stop being at Cranwell House, near St Botolph’s church. In 1901 the company introduced a half-penny fare for workmen which brought about a dramatic increase in business. According to a 1903 inventory, there were ten tramcars, two of which could be pulled by a pair of horses on busy days; the remainder were single horse operated.

In July 1904 Lincoln Corporation formed a company to be known as Lincoln Corporation Tramways and bought the system for £10,488, equivalent to almost £1 million at today’s prices. The intention was to modernise the tramway and the last horse tram ran on 22nd July 1905. The tramcar was specially decorated for the occasion and attracted a large crowd. Following that, the system was closed down for conversion to electric operation. Eight electric tramcars were purchased from the Brush Electric Company of Loughborough and three more were acquired elsewhere.

Trials commenced on 29th October 1905 and a full public service started on 23rd November 1905. It was an immediate success; a council report stated that 40,000 passengers were carried during the first eleven days. Again the same single route was operated. At off-peak times a ten-minute service was run but in busy periods all eleven cars were brought into use enabling a three-minute service. Of course, just as today’s buses are disrupted by the railways, in 1905 the tramcars had to cope with, not one, but two level crossings, High Street and St Marks. Nevertheless, journey times were said to average fifteen minutes.

The Lincoln tramway was one of the very few in England to use the Griffiths-Bedell stud contact system in the roadway. Records indicate that there were two main problems associated with this system. First, gas sometimes leaked from the mains and found its way into the electric power cable conduit. When the gas ignited by the operation of the magnetic switches, the cast iron covers for the inspection boxes were blown off and on more than one occasion, hurled into the air. To reduce this risk, an electric blower was installed at the depot and every morning this blew a current of air through the conduit clearing it of gas.

The other main problem was the need to have a large magnetic contact under the tramcar to activate the studs. These magnetic contacts would collect any metal objects left in the roads, like horseshoes for instance. This occasionally caused a dead short actuating the circuit breakers at the Brayford power station and bringing all the cars to a halt. For these reasons the Corporation decided, in 1919, to replace the stud system with overhead wires and the tramway operated for a further decade, finally closing on 31st December 1929.