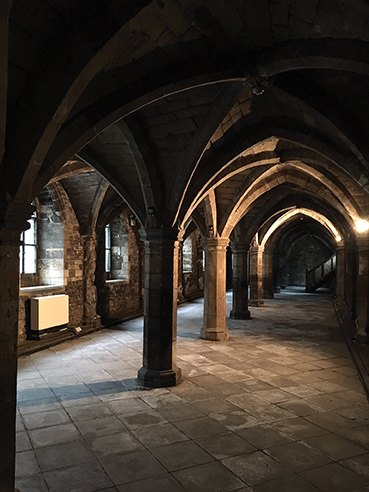 The wealth and importance of a medieval town could often be judged by the number of friaries that it supported. Lincoln supported five: Greyfriars, Blackfriars, Whitefriars, Austin Friars and for some obscure reason, one known as the Friars of the Sack.

The friars represented the latest in a series of movements which brought communal religious life to Britain. Established on mainland Europe in the late 12th century they made a quite determined assault on Britain in the early 13th century. Their principal early objectives had been to establish bases in London, Oxford and Cambridge. Having achieved that, they quickly moved in on the other main Cathedral cities and made their mark. By 1270 there were few towns which did not have at least one friary, many like Lincoln, had more than four. Their evangelical style was quite different to the majority of monastic orders at that time.

The friars lived a fairly frugal life; they owned no property other than the friary, had few assets and existed on public donations. In return they preached in their own churches, or in parish churches, or any other public place or space; they heard confessions and were often retained by wealthy families as confessors and/or advisors. With no organised social services and in the absence of a charismatic parish priest, they tended to attract their greatest support from the poor and needy. They were not welcomed by the established clergy as they were often in direct competition with them for status in the community. There was a certain tension between the two and rumours were spread among the people aimed at putting the other party in a bad light. Some clergy claimed that the friars took advantage of the poor and ignorant. Because of their frugal lifestyle they were inclined to live in poorer neighbourhoods, often inhabiting derelict or deteriorating buildings.

The dissolution of the Lincoln friaries under Henry VIII took place in 1539. The Friars of the Sack had disappeared long ago but the others were described as being in poor condition with nothing much left but stone and glass, but the sites they occupied still represented valuable real estate.

Most of the buildings were left to crumble or were demolished for their stone. The Blackfriars operated from a place described as ‘in Silvergate outside Pottergate’, which we can identify as the site now occupied by the former Sessions House and Lincoln College at the bottom of Lindum Hill and along Monks Road.

The Greyfriars were given a site close to the Guildhall in about 1230 and by 1237 had acquired the Guildhall itself. Building work continued into the 1280s and eventually the friars possessed some four acres of land in the St Swithin’s area bounded to the north and west by Silver Street and Free School Lane, the only friary within the City walls. The part of the Greyfriars which remains to the north of St Swithin’s Church and south of the public library is the only survivor today. Since the dissolution it has been used, among other things, as a private house, a Free Grammar School and, in the 20th century, as the City and County museum.

The Whitefriars, established in the suburb of Wigford, had a site of about four acres but the building was sacrificed in favour of St Marks railway station. The Austin Friaries settled in Newport just to the north of the present Rasen Lane. The Friaries of the Sack lasted less than 50 years at their home in Stamp End.