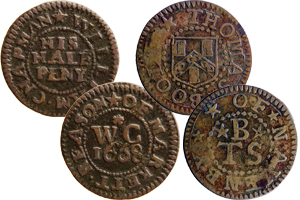 This month Colin Smale focuses on Market Rasen and Navenby. Only two tokens have survived through the centuries to be in good enough condition for a photograph. But each has its own peculiarities, making both tokens well worth a closer look.

MARKET RASEN
We begin with William Chapman, a mercer from Market Rasen. He was born on 16th August 1631 and died in 1698. His halfpenny was minted in 1668; it has survived 353 years and looks better than most tokens of the period.
The coin is a straightforward one – name, denomination and date, without the usual coat of arms.

However, there are two things to notice here. Firstly, his wife Elizabeth is not included, otherwise we might see ‘WC’ (William Chapman) with an ‘E’ underneath. The other thing, which tickles me, is the spelling of Rasen on the token! It is spelled ‘Reason’. I wonder if the Lincolnshire dialect was being rendered here: ‘Ree erz on’? Just a thought.

NAVENBY
Like many Lincolnshire villages, Navenby began its development in the Bronze Age around 2,000 years ago. It continued to develop through the Iron Age and Roman period and there is a large Romano-British settlement there. In the 11th century it received its charter from Edward the Confessor and became a market town. This was renewed by William Rufus, Edward III and finally Richard II. So Navenby had been a market town for some 800 years.

As a result of historical circumstances, largely the loss of its market in the 19th century, Navenby has gone from bustling market town to thriving small village. It has only one 17th-century traders’ token attributed to it, a farthing belonging to Thomas Boole.

Boole’s will, dated 1679, describes him as a ‘mercer’ but his token clearly bears the emblem of the ironmongers’ arms (chain links and three iron ingots). So was he initially a mercer (a trader in cloth and fine linen)? Mercer to ironmonger is quite some leap!

I am going to hazard a guess that he added pots and pans to his shop rather than fashioning iron! A visit to the records office may uncover this history/mystery.

There are three letters within the circle: ‘B’ over ‘TS’ will certainly be for Thomas Boole and the ‘S’ will be for Sarah, his wife, but he has placed these letters in an unusual order. I would like to think he has placed his wife alongside him as ‘TS’ (Thomas/Sarah) and placed the ‘B’ on its own. Am I being a romantic? 