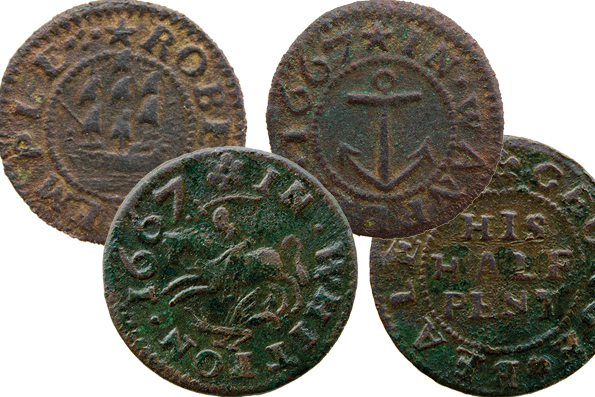 With ‘W’ we come to the end of what has been a fascinating journey into Lincolnshire’s unique 17th century traders’ tokens. Colin Smale looks at the stories behind two more of these historical items.

Three Lincolnshire towns are recorded under ‘W’: Wainfleet, Whitton and Wragby. I have chosen the tokens of Robert Temple of Wainfleet (All Saints) and George Beale of Whitton because they are not only in very good condition (a rare thing) but yet again they are quite different.

Beginning with Wainfleet All Saints, an ancient port town in the East Lindsey district of Lincolnshire. The name ‘Wainfleet’ comes from the words Wegn fleot, meaning a stream that can be crossed by a wagon (compared with ‘wainwright’, a maker of wagons). A wain is a large heavy vehicle for farm use – think haywain.

Wainfleet sits on the A52, five miles south-west of Skegness and fourteen miles north-east of Boston. It lies between two rivers, the Steeping and the Limb, an area known as ‘Wainfleet Haven’. But as an ‘ancient port’ what was it like in the 17th century? Throughout history the port seems to have silted up then cleared before silting up again, so Robert

Temple’s token, a farthing of 1667 is, as is often the case, full of mystery.

His token is profoundly nautical with its sailing ship and anchor but as far as I can tell the port was silted up at this time, in which case he is hardly likely to have owned a sailing ship. So, perhaps he had an inn there, The Ship Inn or perhaps The Hope & Anchor but I can find no record of such inns. A ship’s chandler? Well, if the port was silted up that was going to be a poor business. Some of these traders left copious amounts of historical information for us and some, none.

All we do know of our Robert is that he married one Anne Shipley on 22nd July 1678 in Wainfleet. This is one token that has me beat but if the port was not silted up then skipper, ship owner, inn keeper or chandler, he could have been any of these!

I have chosen George Beale of Whitton to bring this series to an end.

The small village of Whitton is our most northerly village and about as far north of Wainfleet as it is possible to go.

This fine looking halfpenny of George Beale shows St George slaying the dragon on one side and his name and denomination on the other.

Once again this issuer has chosen his own design and you have to wonder if our George thought himself a dragon slayer of some kind?

Although there is no indication of his trade on this coin, he was actually a cattle farmer and a very successful one at that. He ran cattle in both Whitton and Alkborough a mile or two to the south-west. He also had a 1/16th share in a vessel called ‘Hopewell’.

He married one Elizabeth Thornton in 1664 and he died and was buried in Whitton in 1684.

I hope you have enjoyed our journey through 17th century Lincolnshire and if your village was not one that was covered then you will still be able to read about it (if a token was issued) in Mike O’Bee’s book due to be published shortly.

Once again my thanks to Mr M O’Bee of New Waltham, Grimsby and The Spalding Gentlemen’s Society who allowed me to photograph these coins for this series.