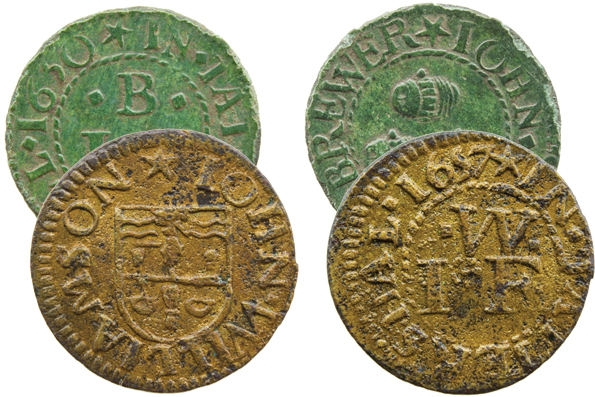 This month Colin Smale focuses on Tattershall. In the 17th century the village had a total of five traders who had tokens struck. These were: John Bodell (brewer), Francis Cocke (possibly an innkeeper), William Hunter (churchwarden), Edward Sharpe (grocer) and John Williamson (baker).

Let us start with the farthing of John Williamson, a baker. The legend on the obverse reads: ‘Iohn•Williamson’ and on the reverse: ‘In•Tattershal•1657’. The coat of arms for bakers is, or should be, a hand holding a pair of scales and three sheaves of corn, one each side and one below as in the illustration – but our John seems to have wanted to create his own version! It is a rather confusing version, with only one sheaf of corn between the scale pans. But hey, as I have said many times, they did their own thing in those days and that is why these coins, these snapshots in time, are so individual, and that is what makes them so interesting.

On the reverse we see ‘W’, ‘I’ (which is actually J) and ‘F’. So we have John Williamson and his wife Francis.
My next choice of the Tattershall tokens is the attractive example of a farthing of John Bodell, a brewer and wonder of wonders. He has saved us all the trouble of doing too much research as he has included his trade with his name on the actual coin – brewer! Cheers, John.

The records show that at the age of 40 ‘gent’ John married one Ann Cundy, a widow, also 40, of Boston on 29th September 1634. However we find that he married again on 17th June 1640 and so we must assume that Ann met an early death.

The legend on the obverse reads: ‘John•Bodell•Brewer’, with three barrels or ‘tuns’ in the centre. The reverse reads; ‘In•Tatter•shall•1650’. In the centre is ‘B’, ‘I’ (which is once again a J) and ‘A’. So this refers to John Bodell and his first wife Anne.

Once again my thanks to Mr M O’Bee of New Waltham, Grimsby and The Spalding Gentlemen’s Society who allowed me to photograph these coins for this series.