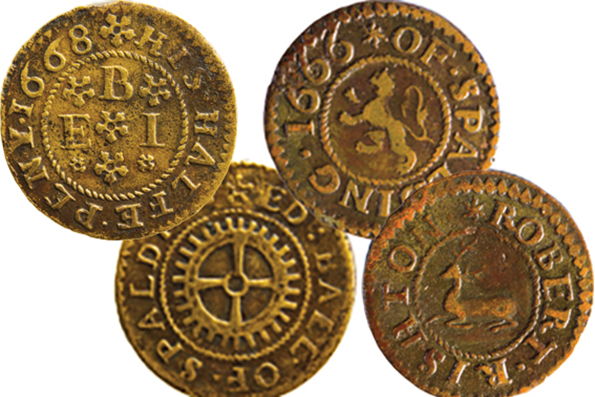 This month Colin Smale focuses on Spalding. The town had eleven traders who issued a total of fourteen tokens and in these cases, the historic records are much more bountiful.

SPALDING
Let us begin with Robert Rishton, described in the parish registry as ‘Inn Holder and gent’. Robert served with Oliver Cromwell’s army before taking over the White Hart Inn, which is still standing today in the market place. Robert’s wife was called Joan and between them they had seven children – all survived but one.

He served as ‘town’s husband’ – in other words, a trustee of a charity responsible for providing relief and assistance to the poor and needy. He does sound like a ‘gent’, doesn’t he?

Robert’s token, dated 1666, is a farthing and as you can see it is in much better condition than many tokens of this era.

The hart clearly represents the inn but why the lion? Well, as I have said many times before, they could put whatever they liked on their coins – maybe Robert, an ex-soldier, felt he had the heart of a lion. Why not!
Next we have Ed Ball.

Ed is variously described as a labourer, husbandman (a person who cultivates the land; a farmer), maltster and miller. He married Joanna Smith (spinster) on 4th June 1655 and they had five children – all survived but one. Once again we see husband and wife in that inner circle. The ‘B’ of course is for the surname Ball, the ‘E’ is Ed and the ‘J’ that looks like an ‘I’ is his wife Joanna.

There is quite often an enigma of some kind on these rare little coins and the huge looking cogwheel is a case in point. One might immediately think ‘engineer’ when seeing this but Ed was not an engineer, so why the cogwheel?
I asked around, I looked high and low for the answer but it appeared to me that no-one knew and so they just mentioned the word ‘cogwheel’ in passing and moved swiftly on, avoiding this particular hurdle.

Suddenly I remembered seeing a huge cogwheel (waterwheel) that still resides in an old brick building on the roadside in the village of Thoresway. I don’t recall if it ever drove a mill or simply powered machinery. I then looked at the mechanisms of various windmills and, for me, the mystery is solved. Remember, Ed was a miller. I don’t know if he worked in a watermill or a windmill, it matters not; both require a cogwheel or two, he would be seeing and hearing this all day long.

Aren’t these unique little coins with their snapshots of 17th-century life so interesting?