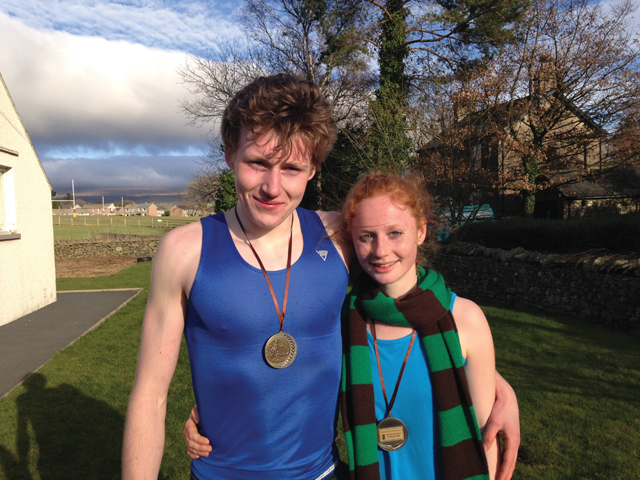 Two teenage Lincolnshire runners are making a name for themselves in fell running at Sedbergh School in Cumbria.
Two Lincolnshire teenagers are celebrating at Sedbergh School after winning both boys’ and girls’ first places in the Cumbrian boarding school’s historic fell race, The Wilson Run – a ten-mile cross-country race which started in 1881, said to be one of the toughest school runs in the country.

In total 167 pupils aged 16 to 18 competed in the school’s historic annual fell race this year, and the highest number ever qualified. Campbell, who is also Head of School, said: “I started to think it was possible I might stand a chance of breaking the record when I came off the fell three minutes quicker than I had last year. The noise coming from the crowds on Library Corner was absolutely incredible, really overwhelming. I remembered the crowd went crackers last year but this was even more. I just can’t wait to come back next year and be able to just watch and cheer. What really stands out for me, too, is the support everyone gives to those who come last – pupils, staff and spectators wait to cheer them on over the finishing line, and many of the top runners will support them in the qualification stages. It is all about going through it together, showing true Sedberghian spirit and camaraderie.”

John and Phoebe have both become committed fell runners since attending Sedbergh School, a co-educational boarding school for pupils aged 13–18, and confess that during the holidays they miss the hills, called the Howgills, which cocoon the Yorkshire Dales town of Sedbergh. However, during the holidays, they enjoy locations such as the Wolds and local woods to run in.
Phoebe said: “It’s beautiful, especially running early in the morning when the sun rises – but it is rather flat!”

The two teenagers, who both board, are members of Sedbergh School Running Team and during the summer they visited the French Pyrenees, training every day and tackling challenges such as the Via Ferrata climb, and altitude training at 2,800m in Andorra.

Reflecting on the Wilson Run win, Headmaster Andrew Fleck said: “John’s relaxed and gentle manner belies extraordinary determination to succeed. This combination, which has made him a popular and successful Head of School, was evident in his record-breaking win. It was incredibly nerve wracking as the seconds ticked away. We are utterly delighted to see Sedbergh athletes reach new levels of achievement and are so pleased for John.”

Ranald Campbell, John’s father, a former GP, said: “Sedbergh School has produced many fine runners over the years but Johnny Campbell and Joe Bird, who recently secured eighth place in the National Schools Cross Country Championships, are two of the very best. It was a privilege to see them run and the twenty-three-year record fall. For the last year Johnny had set his sights on the record, so it was particularly special for him to meet Charles Sykes, the previous record holder.”

Race organiser Jim Fisher said: “It was wonderful to see easily our biggest entry ever to the Wilson. Though sunny, with the ground drying nicely, it was still spongy underfoot, there were strong winds, significant bogs and slippery slopes to contend with. As numerous stopwatches verified the outcome, Campbell’s astonishing achievement rippled down the home straight. Several of the lead runners also achieved times that might have won under different conditions. In thirty years this is just the second time I’ve seen the record fall. Less than a minute separated Phoebe Whatoff’s time from the girls’ record.”

For more information on Sedbergh School and Sedbergh Prep School, and Sedbergh Summer Courses, visit www.sedberghschool.org and follow @SedberghSchool. Visits and bespoke boarding tasters can be arranged by contacting the Registrar on 015396 20535.