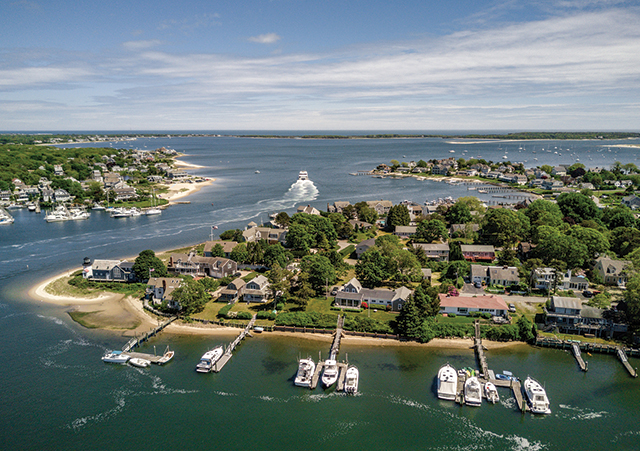 On this page we occasionally look at the links between Lincolnshire and New England and in this issue we focus on holidays and food production.
Both places are holiday destinations, the Lincolnshire coast mainly in summer, popular for day trips but some stay longer, many in caravans, others in hotels or guest houses. New England is also a summer holiday destination for Americans. Maine alone has 3,500 miles of wonderful coastline with big sandy beaches, but for English visitors, New England in the fall (autumn), when the trees turn glorious colours, is often the main attraction.

Most fly into Boston, spend a few days in that wonderful city, then either tour by coach or hire a car. The tour might include Massachusetts, New Hampshire, Maine, Vermont, Connecticut and Cape Cod.

The two places offer similar and equally attractive cuisine; the Lincolnshire coast has its famous fish and chips, mainly cod and haddock. New England also offers fantastic seafood including haddock, but also lobster and scallops at very affordable prices and of course clams, either fried or used in the internationally acclaimed clam chowder.

Boston, MA is also known in the USA as ‘Beantown’ and visitors might want to try the traditional local dish of Boston Baked Beans. This consists of dried pea beans or navy beans which are soaked overnight and then boiled briefly. The beans are then placed in a crock pot with mustard, brown sugar, beer, onions, ketchup and vinegar. The mixture is topped with strips of salt pork and cooked for about eight hours. When ready the dish is served with maple syrup and cornbread. At its best it is very good.

The tradition originated in the days when Church attendance in New England was an all day affair and cooking on the Sabbath was forbidden. Typically the crock of beans was placed in a brick oven on Saturday and left to cook until noon on Sunday when dinner was served.

We in Lincolnshire are rightly proud of our farmers; Boston potatoes and greens are the best in the world. For me, you can keep your Jersey Royals, nothing compares to a Boston new potato.

Not many potatoes are grown commercially in New England but farmers there are famous for maple syrup. There are literally hundreds of dedicated, small scale growers all over the area. Maple syrup production occurs during March and April. When nighttime temperatures drop below 32 F and daytime temperatures rise above 32 F, sap in the maple tree thaws and moves, building pressure in the tree.

When the internal pressure exceeds the external pressure, sap will flow from any fresh wound. Maple producers then tap their sugar maples by drilling a hole in the tree trunk and inserting a spout in the hole. A bucket is then placed under the spout and the process of collecting the crystal clear syrup begins. Full buckets are taken to the sugar house, where the sap is boiled down in an evaporator over a blazing hot fire. As the steam rises from the pan the sap becomes more concentrated until it reaches the appropriate density to allow it to be classed as syrup. It is then filtered and graded and is ready to pour over your pancakes, waffles, doughnuts, cereals or ice cream. I have even seen it poured over a full English breakfast.