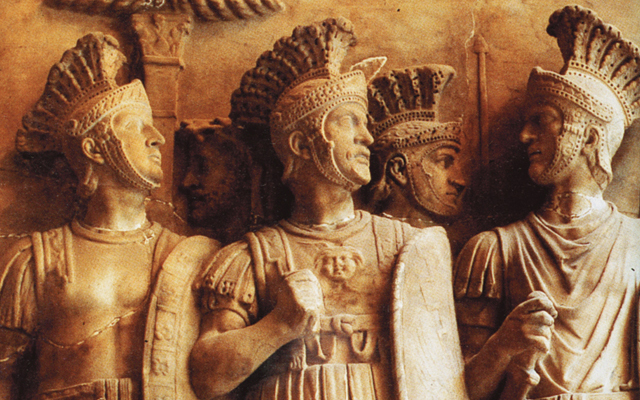 Words by:
Bernard Bale Featured in:
May 2011
Share Article

When Roman feet trod through the marshes
On a clear day when the wind blows across the fields, somersaults through the Wolds and dips the grass on the marshland, an ear of imagination can hear the distinct sound of marching. It is a little distance away but the noise heralds the oncoming view, an imaginary view of helmets, weapons and feet, feet marching through time, through history. They are Roman feet but each step turns them into feet of a different kind, a different era – Viking feet, Norman feet, the feet of civil war combatants, the feet of heroes, the feet of Victorian military, then the feet of those legends of the First World War leading the way before those feet of the Second World War heroes and the feet of those more recently plunged into action in the Middle East.

Yes, Lincolnshire has heard those marching feet many times and will again as we take a trip back through time and gaze in awe once again at those mighty military men and women who have tramped through this great county on their way to the front, awaiting them sometimes a victory, sometimes a defeat and sadly even death but always a place in history.

Perhaps the first feet to actually march through the marsh were those of the Romans whose conquering armies set up camp in Britain around 43AD after landing in Kent and heading north.

It was not long before the 40,000 strong Roman army had made its presence felt throughout the land. The four legions of ten thousand men dispersed with Legion IX Hispana establishing itself in what we now know as Lincoln around 54AD. They saw the possibilities afforded by creating a base at the top of Lincoln hill from where the area for miles around could not only be observed but reached fairly quickly.

Around 71AD this legion left to be stationed at York but was replaced by Legion II Adiutrix who stayed for the next seven years.

Thus Lincoln, or Lindum as it became known, proved to be a strategic fort in the Roman network and we can still see the evidence of Roman influence today simply by driving on one of the many roads created by them or travelling one of the many waterways they also created.

The influence does not end there though. It is amazing how many military people have retired to Lincolnshire. Some were stationed here during their RAF days, others have simply fallen in love with the county and made a home here as soon as their military careers have ended.

That is not new, it is almost a tradition which can be traced right back to the days when those early military men of the Roman legions found themselves in Lincolnshire. One of the purposes of the Roman forts built in Lindum and in other areas of the county was to accommodate resting soldiers. Some got into the habit of spending their leisure time in the county and even as Lindum’s importance as a military base waned, it still held a strategic position by becoming one of the country’s four colonia. These were basically retirement homes for legionnaires who had seen more than twenty-five years of active service. The other three colonia were located in Gloucester, York and Colchester. Lindum became known as Lindum Colonia and thus well-considered throughout the Roman Empire.

While Lindum was the stronghold there were other Roman forts and camps throughout the county. The main Roman forts in Lincolnshire included Winteringham which was on the Ermine Street road link between London and York. The same road included Stamford and Lincoln and is still with us today.

The army was disciplined to an incredible degree and also constantly trained for peak fitness. The roads were a great help of course. The Fosse Way for instance was designed to link Lincoln with Exeter way down in Devon and troops were sent in both directions, quickly covering the distance on foot, an indication of just how fit they were.

The Roman army left quite a legacy for the world’s military leaders. Battle formations, strategy and general tactics may have evolved but the Roman army that marched on Lincolnshire soil has inspired and taught many other armies ever since.

Field catering was also well organised with the Roman soldiers also benefiting from a varied diet which included soups and pulses. The cooking and eating arrangements were as good as many of today’s army catering units.

The Romans clearly firmly believed in the old adage that an army marches on its stomach. They could certainly march and that in itself is a testimony to the army caterers.

There was little rest for Roman soldiers in Britain. They were constantly having to police groups of rebels and had quite a fight on their hands in 367AD when the first of several invasions of the city by Picts and Scots took place.

Lindum had become a satellite of Rome in every sense but as rebellion started to eat away at the borders of the Roman Empire more and more troops were sent to other defences and by the early part of the fifth century the Roman army had virtually departed these shores.

Lincoln was left to its own devices but the Roman infrastructure remained and evidence of it is all around us.

Also still with us is the essence of the Roman army who marched through the marshes, the first organised human fighting machine to contribute to the heritage of Lincolnshire.