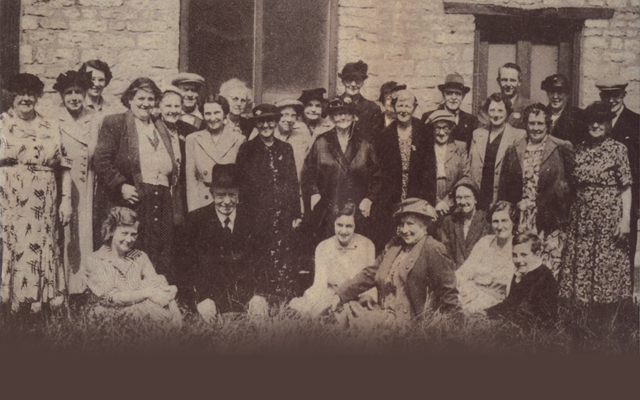 A wonderful piece of history frozen in time.
Hilda Craven was born in Navenby on 28th October 1892. She was orphaned at an early age and brought up in Navenby by her adoptive mother, Mary Barrand. Hilda attended the village school where she recalled that the rooms were heated by big coal stoves and the lighting was gas. She left school in 1906 at the age of thirteen and went to work as a ‘day girl’ for Mr Dawson, the butcher in Navenby. She helped in the house and minded the children for six and a half days a week, for which she was paid 1s 6d. Hilda became Mrs Smith in 1956 at the age of sixty-four when she married Joseph Smith and he moved into the cottage. Sadly, Joseph died less than four years later and Hilda herself died on 22nd May 1995, aged 102.

After her death, villagers were concerned about what would happen to the cottage. A public meeting was called and North Kesteven District Council (NKDC) became involved. It was decided that the cottage should be opened as a museum. NKDC helped in the preparation of a bid for lottery funding which, in 1997, resulted in an award of £65,000. NKDC contributed £4,000 and another £4,000 was raised locally. Restoration work was carried out during 1998/99, the cottage was opened in 1999, granted museum status in 2000 and in 2006 received the Visitor Attraction Quality Assurance certificate. That same year the 20,000th visitor arrived.

The kitchen was at the heart of Mrs Smith’s cottage and it was here that she would welcome her visitors. The fire would generally be alight and Mrs Smith would use it for cooking as well as for warmth. The kitchen range was fitted in the mid 1930s and came from Duckerings in Lincoln. It is a size two open range as the water tank holds two gallons. The oven has a surrounding flue with a damper to regulate the heat and distribute it all around the oven. The late Victorian mahogany table was always covered with a cloth, as was normal in those days. Mrs Smith’s pantry evokes a nostalgic trip down memory lane for many visitors, who can be heard to exclaim, ‘I remember my Grandma had one like that’. Mrs Smith did most of her cooking on the range and made her own jams and pickles. There was no refrigerator so she kept her meat, cheese, butter and milk cool in the meat safe. Mrs Smith’s bedroom is the nicest of the bedrooms as it faces south and has two windows. This was accessed by the use of a ladder, which she was still able to climb at the age of 102. She said she felt safer using the ladder, rather than using conventional stairs, as she could hold on with both hands. The room, or ‘best room’ as it was sometimes called, was only used on very special occasions. Mrs Smith used her wash house until she was in her nineties. On wet days she would have to dry the washing on a clothes horse around the fire. The outside lavatory, or ‘privy’, was used until 1978, when the council insisted she had an inside toilet installed to enable her to stay in the cottage. The picture is completed by a typical English cottage garden of which Mrs Smith was very proud.

The museum now has a visitor centre and it is well worth a visit for both old and young, a look back to the past or an educational experience.