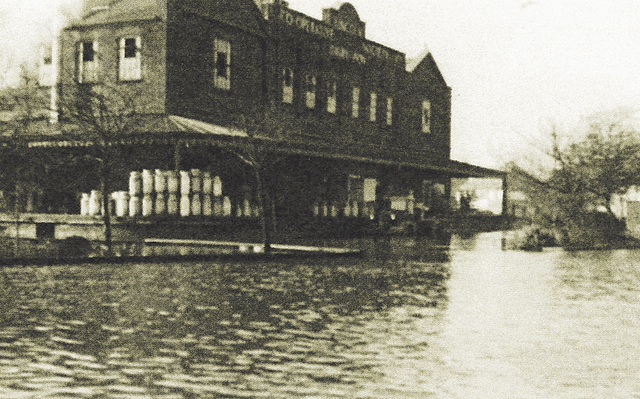 Old Mother Riley was one of the biggest names of stage and screen in the 1930s and ’40s but it all started in a much more lowly fashion when Arthur Towle was born at Sibsey near Boston in 1885, the third of seven children of Thomas and Lucy Towle.
The family moved to Boston in 1891 when Thomas became head groom at the Peacock and Royal Hotel. Arthur was always fascinated by the theatre and at the age of eight obtained a job at Shodfriars Hall theatre, sweeping the stage in the mornings and selling programmes in the evenings, earning the princely sum of tuppence a week.

Whilst Arthur was still at school his father became seriously ill and died. Lucy had to find work to enable her to feed her large family and started to take in washing, some from the Peacock and Royal, but Arthur also brought some in from artistes at the theatre. Arthur observed his mother doing this work, little realising that it would have a, quite literally, dramatic influence on his life in years to come as he was to base his famous Irish washerwoman character on his mother.

Arthur left school at the age of fourteen and continued to work at the theatre but made a determined effort to learn as much as he could about the business. Eventually he left home without telling his mother and headed for Blackpool. To begin with he did a spot of busking on the beach, then sang at a variety of venues, before joining a travelling show, The Musical Cliftons, singing, dancing and doing some comedy. He was billed as Arthur Clifton.

In 1909 The Musical Cliftons toured Ireland and Arthur heard that the Queens Theatre in Dublin were hoping to stage a pantomime. He applied for a part, telling the management that he had appeared in pantomime before and had even written some scripts. It worked, but part of the deal required Arthur to write a pantomime which he did, and Little Red Riding Hood was a huge success when it was performed at Christmas in 1910. Arthur played the Grandmother and it was here that he met Kitty McShane, who played the title role later in the run.

After the pantomime Arthur worked in Scotland and Huddersfield before returning to Dublin with another change of name, Arthur Lucan – he adopted the surname from a Dublin dairy.

In 1913 Arthur married Kitty against the wishes of her parents and the famous partnership of Lucan and McShane was born, with Arthur as the Irish washerwoman and Kitty as her teenage daughter. At first they were seen only in provincial theatres and music halls, but then the impresario Dennis J Clarke discovered them.

In 1923–24 they toured South Africa, Australia and New Zealand and enjoyed great success which continued on their return to the UK, but an appearance at the 1934 Royal Command Performance took them to the very top. Their first feature film was released in 1937, called simply Old Mother Riley. This was followed by another eighteen.

In 1940 they made their first radio broadcast which led to many more up to 1950. Sadly this success was not matched in their marriage. Kitty spent money recklessly and eventually had an affair with Willer Neal who had appeared in some of their films. The marriage broke down, Arthur became greatly distressed and turned to drink. He died in 1954 whilst waiting to go on stage at the Tivoli theatre in Hull.