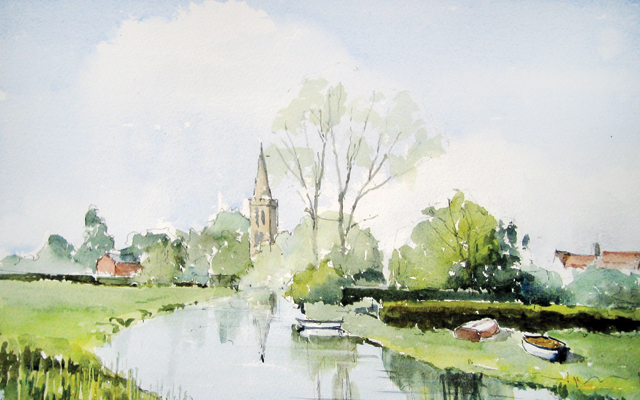 Words by:
Alison Sandilands Featured in:
May 2012
Share Article

Idyllically situated along the banks of the River Welland in southern Lincolnshire is an area known as The Deepings. This includes the town of Market Deeping and the villages of Deeping St James and West Deeping.

Today these are thriving communities, the ancient town of Market Deeping with its attractive old coaching inns and bustling Antiques and Craft Centre, Deeping St James built on land where a twelfth-century Benedictine priory once stood and the picturesque West Deeping featuring quaint stone houses lining a Roman road. A short walk over a bridge from Deeping St James and you will find yourself in the Cambridgeshire hamlet of Deeping Gate, which is also considered to be a part of The Deepings. The River Welland acts as a picturesque border between Lincolnshire and Cambridgeshire. Peaceful river scenes are in abundance here and make for popular rambling territory.

Interesting churches
There are two limestone churches in The Deepings. The largest is The Priory Church at Deeping St James, which is based around a now lost Benedictine priory. The priory was closed under Henry VIII’s dissolution of the monasteries, but some of its stones were later used to build a seventeenth-century manor house. The other is the largely fifteenth-century St Guthlac in Market Deeping. An interesting element of this church is the presence of two limestone sundials – one at the south side of the tower inscribed with the words ‘The day is thine’ and another on the north side saying ‘The night cometh’. It also features some parts dating back to the twelfth-century and has Norman arches and Gothic architecture. St Guthlac is depicted on stained glass windows and there are a number of eye-catching gargoyles. Henry VII’s mother, Margaret Beaufort, donated money towards the building of St Guthlac’s church tower. She occupied a moated manor house in West Deeping. Centuries earlier, this was home to Joanna Wake whose family owned the Manor of East Deepings – the old name for what is today Deeping St James and Market Deeping. The market charter had been granted to the Wake family since 1220 and was granted to Joanne in 1304. In 1308, Edward II renewed the charter in perpetuity to Joanna and her son Thomas, and their heirs. The market was to be held weekly on a Wednesday and is still presently held on this day in Market Deeping. A charter was also granted for a yearly fair to be held here on the vigil and feast of St Michael and the six days following. This fair, known as the Deeping Feast, was still being held well into the twelfth century and many elderly residents of The Deepings have fond memories of eating the traditional meal of ‘duck and peas’. Another member of the Wake family, Joan, was known as the ‘Fair Maid of Kent’. Regarded as a considerable beauty, she was rumoured to have been King Edward III’s mistress who once loosened a garter at a court function, to which the King gallantly picked it up and tied it to his own leg, uttering, ‘Shame on he who thinks evil of this’. This remark became the motto of the Order of the Garter. Joan went on to marry the king’s eldest son, Edward, the Black Prince, in 1361 and their coat of arms can still be seen on the font at St Andrew’s Church in West Deeping.

Fish and chips
The Deepings are famous for fish and chips and an award-winning place to visit is The Boundary fish and chip shop and River Restaurant in Market Deeping. This is located on the border that separates the once amalgamated Deeping St James and Market Deeping. The Boundary has an interesting history. The building dates back to 1890 and began life as a general store owned by brothers Walter and Horace Day. They were members of Deepings Brass Band and would often perform outside the house on a Sunday. Mr and Mrs Ellis took over in the 1940s and split the building between a hairdressing salon and a fish and chip shop, with living accommodation above. Mr Ellis was one of the first fish and chip shop owners to provide a mobile service to the outlying villages, in the form of a converted ambulance. The whole building became a fish and chip shop when it was taken over by the Redding family from 1965 to 1980. Another family took over for a few years and in 1989 the Williams/Massie family made an extension, which is now the eat-in area and staff room. A Greek family took it over for a few years and then Seafare At The Boundary mastered the helm and opened The River Restaurant in November 2008.

Working to stimulate the local economy
Market Deeping is home to a variety of independent shops and businesses. A not-for-profit town organisation, Deepings Business Club, has been working to provide support and advice for local businesses, through weekly meetings on relevant topics. Club chairman, Guy Porteous said they were hoping to stimulate the local economy with a ‘trade local’ campaign, aimed at encouraging people in The Deepings to take advantage of the shops and businesses on their doorstep. He said: “It is hoped that this campaign will attract people to The Deepings. Market Deeping is a market town and conservation area, which is handy for Peterborough. But with the cost of petrol at the moment, this is a good reason to be shopping locally.” Another project currently being worked on is the introduction of local produce markets in addition to the weekly market, with the first one being scheduled for July.

Archaeological findings and visible heritage
Turn back the clock to prehistoric times and this low-lying land would have been surrounded by woodland and bogs, roamed by long-extinct creatures. There have been numerous findings over the years, including the unearthing of straight tusks belonging to an ancient breed of elephant in the gravel pit at Deeping Lakes, east of Deeping St James. An extensive excavation of 200 acres of land between Market Deeping and West Deeping uncovered the remnants of a Roman settlement. Layers of even older history were discovered at the same location – with evidence of Bronze Age occupation and the remains of Neolithic buildings found by archaeologists. These findings confirm the fact that man has occupied The Deepings for many thousands of years. Life in this area continues today amidst the visible signs of past eras.

In Market Deeping, a noticeable feature of the Market Place is its striking former coaching inns. This includes The Stage – a restaurant and hotel that was once the nineteenth-century New Inn. Much of the original stonework and beams have been preserved in order to maintain the historic character. Another is The Bull Hotel, which dates back to the sixteenth century. In Deeping St James, a nineteenth-century lockup, where the village’s criminals would have been held, is located on the corner of Eastgate and Church Street. This was originally the market cross, erected during the fourteenth century, at the time when Edward III was on the throne.

Events coming up
Two major events on the area’s calendar today are organised by Deepings Lions Club. These are the Deepings Lions Carnival in July and the Deepings Duck Race in September, where the River Welland turns yellow with numerous plastic ducks. Coming up on 12th and 13th May is the Deepings Festival of Visual and Performing Arts. Taking place at the Deepings School in Deeping St James, there will be performances from local schools and drama groups, with a variety show on Saturday night and an art exhibition on both days. There will be everything from Zumba and tai chi to dancing and karate.