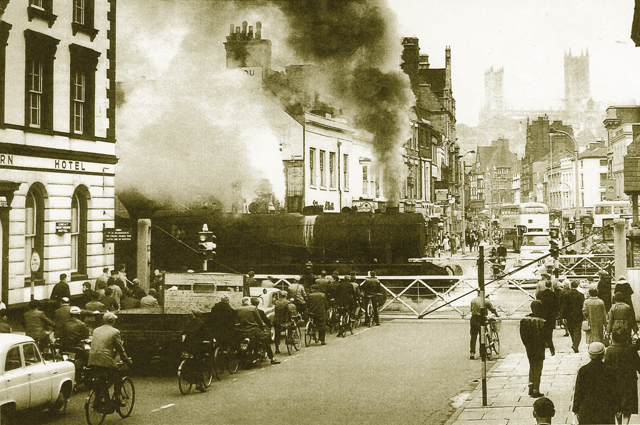 There had been several proposals for railways along the Witham Valley, all coming to nothing, but eventually one did get the go-ahead.
The River Witham has been an important waterway from the Iron Age onwards and from Roman times has been navigable from Boston to Lincoln and was an important trade route. A steam packet boat was introduced along the river between Lincoln and Boston in 1814 but the journey still took most of the day. Thirty years later travel between the two towns was about to undergo a revolution.

In 1846 the Great Northern Railway bought the Witham Navigation and construction of the fifty-eight miles of the Lincolnshire ‘Loop’ Line from Peterborough to Lincoln, via Spalding and Boston began early in 1847. Much of the route consisted of straight level sections and the only engineering works of note were iron or timber bridges across the waterways. The line opened on 17th October 1848.

From Boston to Lincoln most of the track was laid on the eastern bank of the Witham. Nine stations were provided on this section at Five Mile House, Washingborough, Bardney, Southrey, Stixwould, Kirkstead, Tattershall, Dogdyke and Langrick, mostly adjacent to traditional ferry crossings. Initially the ‘Loop’ had main line status and enjoyed Royal patronage when Queen Victoria travelled this route to Balmoral in August 1851, but in 1852 most through traffic was taken away by the GN main line. Eventually the basic passenger service consisted of Lincoln to Boston and Lincoln to Skegness.

Seaside excursions were frequent in summer and anglers’ specials from the industrial centres of Nottinghamshire and South Yorkshire called at every station along the Witham in season. Coal traffic from Doncaster to London was a considerable source of revenue for the GN and much of it went via the ‘Loop’. Delays to prestige expresses on the main line were thus avoided and the lack of gradients meant that engines could cope with half as many wagons again. Gradually, over time the line was closed but the former trackbed now forms the Water Rail Way, a thirty-three-mile walking and cycling route from Lincoln to Boston.

Between 1845 and 1847 there were six unsuccessful attempts to put Horncastle on the railway map. However, in 1853 local interests formed the Horncastle and Kirkstead Junction Railway and GN agreed to work the line on favourable terms. On 11th August 1855 Horncastle celebrated the opening of its seven-mile branch line and within days trains were bringing visitors to one of England’s greatest horse fairs.

For a week the town was full of a motley throng of fairground entertainers, gamblers, card sharps, petty criminals and prostitutes all mingling with hundreds of horse dealers. The railway was well received by the community and was, to begin with at least, a great success.

An intermediate station was provided at Woodhall and Kirkstead station was renamed Woodhall Junction, from where the branch line ran. At that time Woodhall was a mere hamlet but all that was about to change. A somewhat eccentric local entrepreneur, John Parkinson, dug a deep pit looking for coal. Instead he found water rich in iodine and bromine and this quickly gained a reputation for healing sick horses and curing people of all kinds of ailments.

Woodhall developed into a fashionable spa town boasting hydropathic facilities, good hotels and many fine houses. It was said that patients arrived hobbling but were soon taking part in sports and throwing away their crutches and wheelchairs. Direct trains were provided from London Kings Cross to Woodhall Spa and a golden era began. Eventually the branch line closed but the trackbed now offers a pleasant walk from Woodhall to Horncastle.