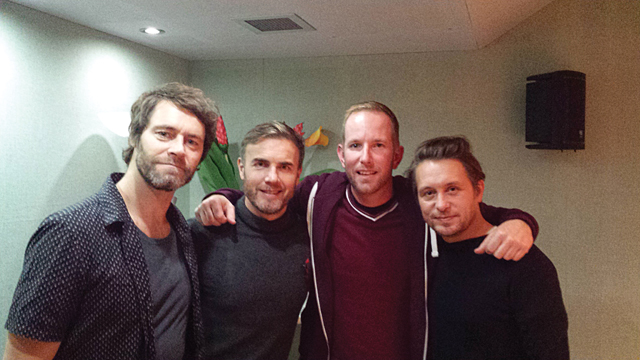 Rob takes up the breakfast baton

We all remember those amazing scenes across Lincolnshire two years ago, as the Olympic Torch passed through the county, from torch bearer to torch bearer, cheered on by the waiting crowds.
Well, in one way it’s a similar process being Breakfast Show presenter at Lincs FM – you’re handed this precious baton, expected to hold it aloft and start running with it; you hope you won’t drop it, that the flame won’t go out, and that the crowds are still cheering you on.

That baton recently passed to Rob Hammond, a former Fish Fryer of the Year from Louth. Rob’s actually been with Lincs FM for over a decade now, presenting a variety of shows. For the last six years you’d have found him on the extremely popular Afternoon Show from 2pm to 6pm. Now he’s swapped his lie-ins for early nights as he takes up the baton and hosts the Breakfast Show each weekday, 5am–10am. It’s quite a change to Rob’s original career choice, when he used to work for Mr Chips in Louth, a job he admits he enjoyed – although his first love was always radio.

Rob’s appointment was part of a wider autumn refresh at the station, with Andy Fenton replacing Rob on the Afternoon Show, having spent thirteen years hosting the Evening Show on the station. Meanwhile, Ross Garrigan became the newest addition to the station, replacing Andy on the Evening Show. The twenty-one-year-old, from Grantham, is currently studying at the University of Lincoln as well as presenting the daily show.

Another change includes the introduction of Classic Hits 80s each Sunday morning from 8am, a full hour of hits from the 1980s dubbed as the best way to start your Sunday.

Director of programming, Sean Dunderdale said: “We felt it was time for a bit of a reshuffle, and with Rob on Breakfast, Andy moved to mornings, Ross brought in to Evenings and the ever-popular John Marshall staying on his 10am–2pm show, we’re ending the year with a refreshed line-up ready for whatever the winter months may have to throw at us.”

The winter months do indeed bring a series of challenges for a radio station that’s committed to the local area, twenty-four hours a day. Sean said: “Last December, we well remember the tidal surge that brought flooding to parts of our area, in Boston, Skegness, along the coast and the banks of the River Humber and Trent and we hope nothing like that will happen again this year but the whole team at Lincs FM has to be ready, just in case, to provide extra programming and vital information day or night should the worst happen.”

Every school in Lincolnshire and Newark has been contacted by the station in recent weeks, with information on how to confirm a school closure in the event of bad weather or other problems.

Sean said: “We have a strict procedure in place for school closures, including asking certain information of those calling in – and a password too, which is changed annually. You’d be surprised how many children try – and thankfully fail – to get us to announce their school is closed, when it’s in fact fully open! In fairness to them, if I thought I could have got an extra day off school for doing it, I’d have tried too! I’m glad we have the right systems in place, though, to stop it from happening!”

Meanwhile, there’s one other individual who’s been contacted by the station ahead of a busy time for him. Sean said: “Yes, we’ve dropped Santa a note reminding him to make sure Rudolph and Co are listening to Lincs FM over the festive period, as we keep a check on the roads and public transport, ensuring the sleigh doesn’t get stuck in any travel delays and we all get our presents on time, come December the 25th.”

It’s all part of the service from a radio station that is truly local to Lincolnshire and Newark.