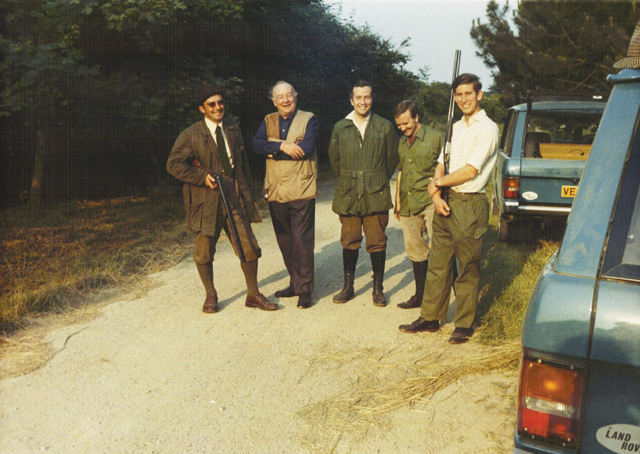 Although his name may not be on everyone’s lips, to many Sir Joseph Nickerson was one of the most important Lincolnshire personalities of the twentieth century.
Born in Lincolnshire in 1914, he liked to be known first and foremost as a farmer, but in reality he was one of the most progressive and innovative agriculturists of the post-Second World War era. His father had died prematurely and with no scientific training he became head of the family business at Rothwell near Caistor, at the age of twenty-five.

During the 1930s, when farming was at its lowest ebb, on the then barren Lincolnshire Wolds he gained a reputation for being a young farmer who could manage profitably despite the ever increasing number of farms going into receivership. As part of a post-war government commission he identified that there were no cereal varieties available to British farmers that could compete with the continentals. He therefore obtained the UK agencies for varieties from twenty-nine European breeders and this led to the creation of one of Europe’s biggest private plant breeding operations.

Agreements with leading European breeders of cereals, potatoes and forage crops enabled him to introduce, in the 1960s and ’70s, an unrivalled range of new varieties, resulting in a dramatic increase in yields. Potato varieties such as Desiree secured a substantial share of the UK market and grasses developed at this time became a vital part of the mix. Over eighty cereal varieties were introduced, which account for a large proportion of the UK cereal market.

The introduction of winter barley into the UK was another Nickerson inspired idea and at one time Nickerson varieties accounted for over ninety per cent of national acreage. In 1979 Nickerson’s received the Queen’s award to industry for its technical developments.

His vision of increased corn production suggested to him an abundance of animal feed in the future. This led to the establishment of Cherry Valley Farms, to pioneer scientific duck breeding and production and this company became the world’s leading supplier of breeding stock; its activities extended to over eighty countries. In 1978 a wholly owned sister company, Concord Farms, was established in North Carolina, USA and this company soon became the second largest producer of duck speciality products in America. Another venture into animal genetics was the purchase in the 1970s of the Cotswold Pig Development Company.

A second arm of his remarkable career was as a sportsman. His achievements as a lover of shooting will be talked about as long as people shoot. He built up the finest wild partridge shoot ever seen in this country. In 1952 he and five Lincolnshire friends achieved a world record ‘bag’ of 2,119 birds in one day – a record which stands to this day and which many people believe will never be beaten. He was regarded by many as one of the best shots (some say the best) in the country, if not the world. A frequent guest on shoots on the Rothwell Estate was HRH the Prince of Wales.

Sir Joseph served continuously for thirty-two years on local district councils including a term as chairman, was president of the Lincolnshire Agricultural Society in 1981 and was Home Guard commander during the Second World War. He was knighted in 1983 for services to agriculture. The Joseph Nickerson Memorial Gallery is situated at the villa in Rothwell. He died in Palm Beach, Florida in 1990.