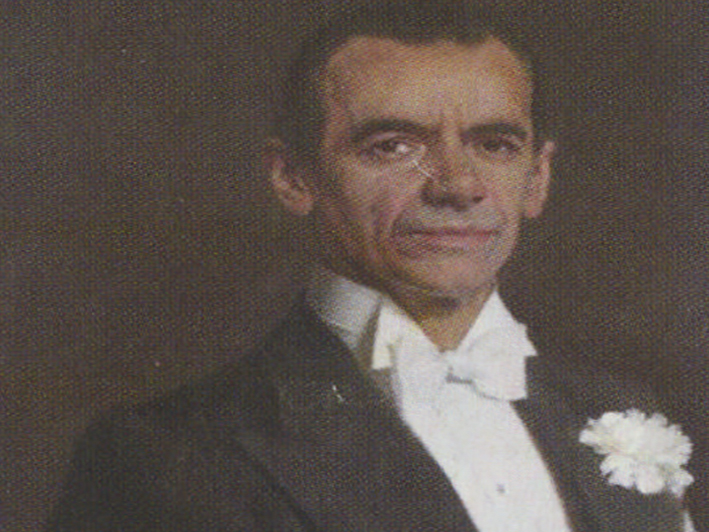 When Agnes Sargent, a matron at Stamford High School and her husband Henry, a coal merchant in Stamford, discovered that Agnes was expecting a baby, they naturally expected that their offspring would be born in Lincolnshire, a true Yellowbelly.
Unfortunately, while Agnes was visiting a family friend in Ashford, she suddenly went into labour and young Malcolm was born in Kent on 29th April 1895. However, they were soon back at the family home at 24 Wharf Road, Stamford and even after he became world famous, Malcolm still regarded Stamford as his home town.

Henry was also a piano and violin player and he decided that Malcolm should have piano lessons with Frances Tinkler. At the age of 3 he attended the infants department at the National School in Stamford and just before he was 6 transferred to the Blue Coat School. At the age of 12 he became a pupil at Stamford Grammar School where he was allowed to practice the piano instead of doing sports. After leaving school at 15 he continued with the piano and taught himself transposition.

Malcolm Sargent was taught, first by his father at St John’s and then by the organist at All Saint’s church, Stamford, to play the organ. In July 1912 he was successful in the examinations for the Royal College of Organists and became an associate of that body.

His first experience as a conductor was with a group of Frances Tinkler’s pupils in 1909, when the Stamford Operatic Society was rehearsing The Yeomen of the Guard. One day the regular conductor was unable to attend and Malcolm was asked to stand in for him. This was a landmark in his musical career and his first public appearance as conductor was on 24th/25th July 1912 at a pageant to commemorate the visit of Queen Elizabeth I to Burghley in 1565.

Frances Tinkler commented that Malcolm Sargent “had the assurance of Old Nick”, an important quality in a world class conductor perhaps. In the autumn of 1912 he was articled to the organist at Peterborough Cathedral travelling each day by train. In 1914 he was awarded the degree of bachelor of music by Durham University and in the same year he was appointed organist of St Mary’s parish church, Melton Mowbray. He was the youngest of 151 candidates for the position. In 1915 he was appointed music master at Melton Mowbray Grammar School and when the conductor of the town band was called up, Sargent took over. In 1918 he himself was called up but was released soon after the armistice and returned to Melton.

Another important landmark event came in 1921 when Sir Henry Wood was invited to bring the Queen’s Hall Orchestra to Leicester and the organisers asked Sargent to write a piece of music for the event. There was some delay in producing the piece as a result of which Wood insisted that Sargent conduct it himself which he did, so successfully that Wood invited him to repeat the performance at the Proms later on in the same year. That was the start of a hugely successful relationship with the Proms of which he was chief conductor from 1948 to 1967. In the course of his career he was associated with many musical ensembles including the Royal Choral Society, the D’Oyly Carte Opera Company, the London Philharmonic, Hallé, Liverpool Philharmonic, BBC Symphony, and Royal Philharmonic orchestras. He was knighted in 1947.

Malcolm Sargent died on 3rd October 1967 only two weeks after making a very emotional speech at the last night of the Proms. He is buried in Stamford cemetery and his tombstone is inscribed, ‘We thank Thee who has revealed Thyself in great music, and for giving us understanding of it’.