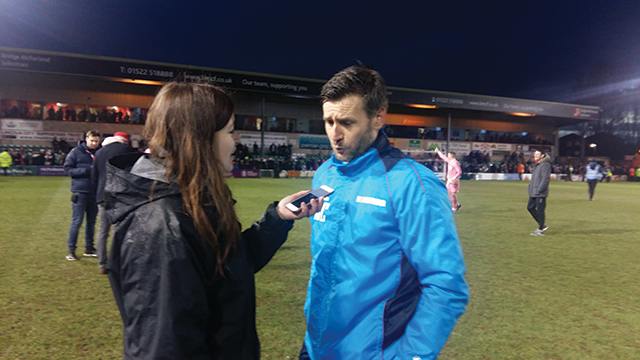 The new football season is well underway and at Lincs FM they are hoping for another successful year for local sides.
Last season of course saw Lincoln City promoted back to the football league, six years after suffering the cruel blow of relegation, while Scunthorpe United came close to promotion to the Championship, topping League One for much of the season. In the end, though, as Iron fans will know only too well, it wasn’t to be!

Add with the joys and woes of Grimsby Town – also in League Two with Lincoln City – plus Gainsborough Trinity, Boston United and Lincolnshire’s other non-league sides such as Grantham Town, Lincoln United, Spalding United and, this season, Cleethorpes Town – there’s certainly plenty for the radio station to be covering.

Director of programming Sean Dunderdale told Lincolnshire Life: “Because our team of presenters and journalists all live locally – and many grew up here in Lincolnshire and Newark – there can be a fair bit of football rivalry in the office. Thankfully it doesn’t spill out on the airwaves.”
Breakfast Show presenter Rob Hammond, for example, is a Grimsby Town fan, journalist Kelly Pyart supports Lincoln City, while Sean is himself Scunthorpe born and bred!

Sean said: “It does make Mondays mornings fun, if the weekend results are discussed!”

On air the station works hard to ensure it’s being fair to all of the main sides – though it will always be proudly biased towards all of the local teams. Sean said: “The problem comes, of course, when Lincoln City plays Grimsby Town now that they’re both back in League Two. But we’ll make sure each side is given equal coverage, as ever. We usually know we’re getting it right when Imps, Mariners and Iron fans complain that we’re giving more – and much better – coverage to one of their rival clubs, when, in truth, we’re treating them all the same.”

It’s not just football the station covers in its daily sports bulletins, aired each weekday morning and afternoon. There’s a wealth of other sports the team can get their teeth into.

Sean told us: “We are very lucky in this part of the world to have such a wealth of sport, and sports stars. I know some people think, just because we don’t have a Premier League football side, we’re not a sporting county. Of course, anyone who lives here – and listens to Lincs FM Sports Bulletins – will know that’s far from the case. Lincoln City helped put us firmly on the map last season and hopefully they’ll do more of the same time and again but let’s also not forget we also have the Home of Golf in England at Woodhall Spa, the amazing Cadwell Park, Market Rasen Racecourse, Lincolnshire Cricket, Newark’s excellent Rugby Club and the Speedway in Scunthorpe. Lincs FM also regularly chats with our local sporting heroes from darts player ‘Wolfie’ Adams, racing driver Jack Harvey, superbike champ Peter Hickman, swimmer Jack Burnell and even former British Lions star Rory Underwood who lives in the county, to name but a few.”

Lincs FM isn’t a sports radio station but its ethos of being passionate about all things Lincolnshire and Newark means it naturally supports our local sporting sides, clubs and players.

The station is also keen to hear from smaller sports clubs and individuals from across the area. If you feel you have something sporty worth mentioning on air then you can email the news team at news@lincsfm.co.uk