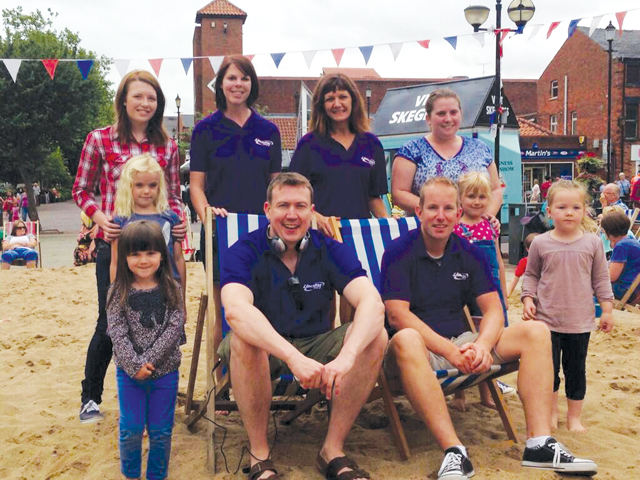 It proved to be a BIG summer for Lincolnshire and Newark’s most listened to radio station Lincs FM.
As mentioned briefly in July’s Lincolnshire Life, the station embarked on it’s Big Month Out, with the aim of visiting every single part of the area it broadcasts to throughout the month of August.

Lincs FM teamed up with Lincoln College, whose students have worked hard for almost a year on ‘pimping’ a van, complete with sound system, alloy wheels, even designing and spraying it to give it a unique look. The van became the centrepiece of the Big Month Out, with listeners being encouraged to ‘tweet’ photos of it as it toured the area.

Lincs FM’s director of programming, Sean Dunderdale said: “We were all caught up in the excitement of the Olympic Torch making its way through Lincolnshire last summer and wanted to do something similar. We couldn’t quite match the Torch, but we did have a bright flame coloured van instead.”

The team had been planning the event since the start of the year but it was a chance conversation with Lincoln College that really sealed the Big Month Out. Sean explained: “We were certain we wanted to visit every part of Lincolnshire and Newark, we just needed to find the wheels to do it. Lincoln College told us about their van and asked if we’d like to take it out for a day. Our immediate response was, how about taking it out every day for an entire month?”

The tour started in Lincoln at the start of August, with free bacon butties being handed out on the city’s Open Top Tour Bus, which brought listeners from the Cathedral to Lincs FM’s first special Big Month Out show, being broadcast live from the ‘pop-up’ summer beach in Lincoln’s City Square.

Other highlights included a Family Fun Day at Newark’s Kelham Hall, a look around the Lancaster ‘Just Jane’ at the East Kirkby Aviation Centre, being in among the traders at Scunthorpe Market, Hula Hooping at Revesby Show and culminating with an appearance at the McFly gig, part of Rasen Rocks at Market Rasen Racecourse.

Sean said they were overwhelmed by the response to the event: “Three days into the Big Month Out, we visited Navenby and people were queuing up to greet the van. Even better, they’d baked us a cake too. Lincs FM presenters are easily bribed with cake!”

Everyone who visited the van also went into a free prize draw to win £1,000 worth of vouchers to spend at Oldrids and Downtown, or £500 off a sofa at DFS.

Such has been the success, the station is already planning even bigger things for next year. While the Lincs FM team would like a bit of a rest first, Sean said there’s little chance of that: “September is the start of the new school term, and we have a load of new ideas for those in and out of class, including a new feature, Small Talk in Sam Kirk’s Breakfast Show. The football season’s also back underway for our local sides, so we’ll be covering the highs and lows of whatever the season has to offer, and then we have Christmas to prepare for!”

One thing is for sure: for Lincs FM August may have been a Big Month Out but the autumn offers an even bigger season of entertainment.