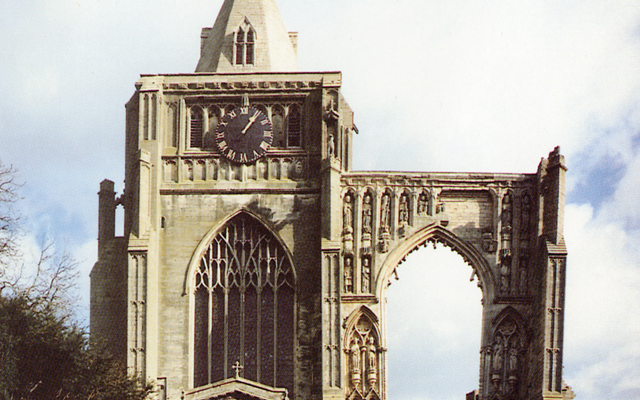 One of the last outposts in South Lincolnshire is the little market town of Crowland. It is home to a monument that has seen and survived many historic events.
Sitting close to the point where Lincolnshire, Cambridgeshire and Northamptonshire meet, the town has two remarkable features: the magnificent Crowland Abbey and the famous Triangular Bridge, which is believed to be unique in the UK. As a result of these things it became known as ‘the little town of great renown’.

Back in the dark ages, after the Romans had left, Crowland was an island in the middle of a vast swampy wasteland, accessed only by small boats. It was in AD 699 that a boat arrived at this isolated patch of dry ground. In the boat was a young Mercian nobleman by the name of Guthlac, who belonged to the family which produced the Kings of Mercia.

After a wild youth, during which he became what we would today call a gang leader, involved in violence and thieving, he decided to abandon his wealth and devote himself to religion. For about two years he studied at Repton Abbey in Derbyshire, then at the age of about twenty-six, he determined to embark on a life of even greater solitude and austerity. So he set off in his little boat down the River Trent, eventually arriving at the place which was then called Cru-land, meaning soft, muddy land, which later became Croyland in the medieval era and is now called Crowland. The reason for the final change is not exactly clear, some believe it may be no more than a typographical error.

Here Guthlac built himself a hut and a little chapel and for the rest of his days lived on simple and meagre fare; clad in animal skins, but happy in this dreary and barren land, as a follower of God and student of nature. During this time Guthlac was visited by Ethelbald, who was locked in a bitter battle for the crown with his cousin, Ceolred. Guthlac prophesied that Ethelbald would succeed in his struggle without bloodshed.

Guthlac died in 714 and was buried in his own little chapel, which became a place of pilgrimage. Two years later Ethelbald became King of Mercia (without bloodshed as Guthlac had predicted) and founded Crowland Abbey in memory of his friend, who became Saint Guthlac. It is said to be the first church in the country to have a peel of bells (circa 986) and the first bells to be broadcast on radio, in 1923.

Crowland Abbey remained an important destination for many years; in 1461 Henry VI came to pray to Guthlac. Of course it was closed by Henry VIII and in 1643 became the scene of a small Civil War battle when it was bombarded by Cromwell’s forces; Crowland was strongly Royalist. Three times in its long history the Abbey has been destroyed by fire and three times it has been rebuilt, each time to an even greater level of splendour.

After the dissolution, the monastic buildings and cloisters were largely destroyed and the church lost its choir, transepts and central tower, but that which remained intact became the parish church, and it is still so to this day. It is a spectacular sight, as is the triangular bridge, standing at a crossroads in the middle of the town. Built in 1370, when the streets were waterways, it replaced a wooden bridge built over 1,000 years ago. It is rather like three half bridges, joined at the centre and climbed by three flights of steps. The riverbeds were filled in during the seventeenth century after the streams had been diverted. Crowland is well worth a visit.