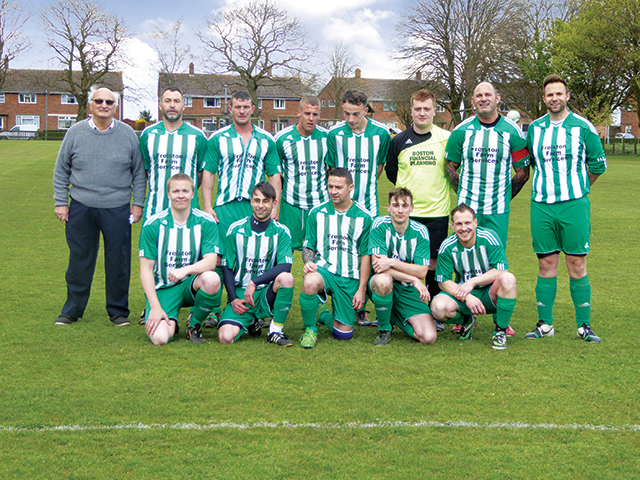 That’s what you call ‘dedication’

Frank Swain’s decades long commitment to Freiston Football Club reflects not only a passion for the sport but the importance of local community involvement. Lincolnshire Life hears about how he has stuck with his team through the ups and downs.
There is always a buzz of anticipation, excitement and nerves around on Saturday mornings when the local football season begins. The wondering whether you will be picked, the speculation as to whether you will score or just the question of whether the game will be on.

Hundreds of players of all ages anxiously wait to hear about their football team. The team they love, hate, don’t care about (when not picked), are passionate about when playing, that they despair of and get angry about, but the team they ultimately turn up for every week regardless.

Parents spend their time ferrying cars full of muddy, happy or disheartened school age children from one corner of the county to the other; partners pace the sidelines to support their loved ones; and wives turn up with toddlers and children in tow, trying hard to make it a nice family outing – watching Dad play his beloved football.

And so this story begins: Frank, football and Freiston! Frank Swain was kind enough to agree to an interview with me – something his modesty would usually dissuade him from, but with his daughter Linda there to support and at times ‘prompt’ him, he was happy to reminisce and recall some of the events and memories of his long and dedicated devotion to Freiston Football Club.

Frank’s love of football started with his father back in 1947, when he helped him to mark out the pitches for Fishtoft Football Club, which in those days were marked out with sawdust. The pitches were farmers’ fields and the changing ‘facilities’ were behind the nearest hedges – can you imagine what Health and Safety would say today! From 1947 onwards Frank has been involved with Fishtoft Football Club and apart from taking time out for National Service between 1952 to 1954, he has been the driving force behind the club.

He played his last season for Fishtoft in 1958 following an accident at work which left him with a spinal injury meaning he could no longer play – but he became a key player in the back room! In 1968 Frank was asked to join the committee and also became chairman of the club, a post he still holds today.

Freiston Football Club and playing field has been very much a part of the Swain family life, with Frank’s wife Anne also playing a major role to support the club. “Anne was the organised one,” Frank said and told me how, as treasurer, she would arrange fundraising events for the team and look after ‘subs’ which she would not let any player ‘forget’ to pay!

Between them they arranged discos/dances for the under 15s every month from 1981 to 1996 and one of these even included a special event hosted by Radio Hereward, a well-known local radio. These types of events were the ones the public took part in and were well aware of but there was a lot of work that went into arranging and organising these fundraising events and this was where Frank and his family came into play. Frank and Anne even asked that their silver wedding anniversary presents be money donated to buy a children’s slide for the playground on the playing field at Freiston FC – now that’s devotion for you.

Frank was not only the chairman but also the groundsman, marking out the pitch every week, putting the nets up every week, running the line when required and even standing in as referee for some of the friendly matches – in his own words “general dogsbody!”
He attended all the league meetings and sent all match reports after every game. He made sure the kits were ready and that all players could get to and from matches. He was not involved in management decisions such as who was to play and who was not – very political as Frank said – but he kept in contact with all players, communicating with them and keeping the link going between each game.

His daughter Linda was with us during the interview and between Frank and Linda I felt a great sense of pride and emotion for the happy times spent (and still spent) with Freiston FC. They both reflected on many different stories connected to their time with the club. One particular favourite incident Frank recalled was when Linda was actually running the line as well! It was during a match in Spalding when one of the Freiston players had his leg badly broken and after being strapped up and prepared to go in the ambulance to hospital, the extremely committed player actually asked the ambulance drivers to wait so he could see Freiston take the penalty rewarded as a result of his injury! Frank thought that was one of his favourite moments and the player is still with the team twenty-six years later!

Although Frank has two daughters he refers to Freiston players as ‘his boys’ and knows them all personally taking an interest in their lives and families as well as their football. Frank’s daughter Linda has been the club secretary for twenty-nine years, dealing with the paperwork and meetings etc and at 83 Frank still marks the pitches out and attends all matches, whether at home or away so it has been very much a family commitment to this local team.

This incredible commitment continues from both sides today whether in season or out. The team have a great affection for Frank and were delighted to win the treble “for him” in the 2012–13 season. Last year they finished fourth but Frank was equally as proud of them and funded their end of season ‘do’, although did not attend it himself. He covers any fines incurred by the players’ ‘indiscretions’ throughout the season and is always on hand for any advice and support for ‘his boys’.

Frank is a gentleman of character and commitment with an obvious caring nature. He received an Award for Services to the Community in 2009 from the then Mayor of Boston Peter Bedford, for his work with the Freiston Playing Fields, the home ground of Freiston FC, and for the running and upkeep of the Danny Flear Centre also in Freiston. If this was not enough, Frank also found time to volunteer at the Citizens Advice centre in Boston for a number of years – again reaching out to help other people.

With Gladys Kenny – Leicester City’s oldest season ticket holder – at 97 and Frank at the tender age of 83, it seems that the ‘even older’ generation know no bounds when it comes to commitment and loyalty. Football is an ever changing, ever questioned game with wages, rules and behaviour constantly being scrutinised and examined but there are still some who see it as the old fashioned entertainment and straightforward game it started out as.

Frank Swain is one of those people who still considers his local football team with affection and dedication, happily accepting the good with the bad, the ups with the downs and the highs with the lows. After almost fifty years he is still supporting, encouraging, assisting and most of all taking pride in his very own local football team. That surely shows total dedication for you and may his loyalty and love of his local team continue for many more seasons to come.