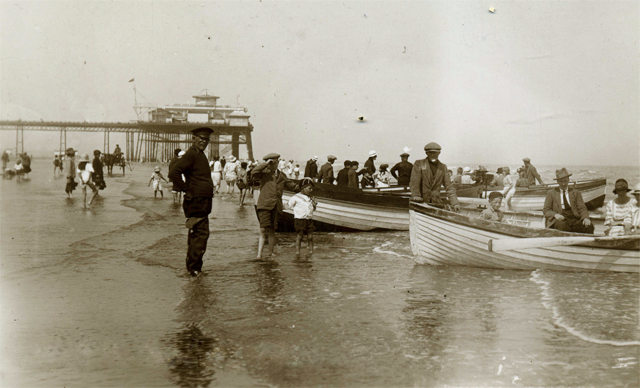 The Blackpool of the east coast

It is unclear exactly where the name of Skegness came from. Some believe it took its name from Skeggi (meaning bearded one), one of the vikings who established the original settlement to the east of the current town which was washed away by the sea in the early sixteenth century. Others, however, think it was derived from modern Danish words meaning beard and nose or, in geographical terms, headland.
Sometimes known as the Blackpool of the east coast, Skeg (or Skeggy as it is also affectionately known to many) has a long and honourable history and has provided hours of pleasure to millions of people for well over 100 years. Skegness was primarily a fishing village until the arrival of the railway in 1873. In 1908 Great Northern Railways commissioned a poster to advertise excursions to the resort, the first being from Kings Cross on Good Friday 1908, leaving London at 11.30am. The ‘Skegness is so Bracing’ poster featuring the Jolly Fisherman helped to put Skegness on the map and is now world famous. The poster, developed from an oil painting by John Hassall, was bought by the railway company for twelve guineas. It is said that Hassall did not visit the resort until 1936 and died penniless. The word ‘bracing’ refers to the wind which often blows off the North Sea; some describe it as cold but I prefer to think of it as refreshing.

Most of the land which now forms the main core of the resort was part of the estate of the Earl of Scarborough and he and his agent saw that the extensive sandy beaches could be made attractive to holidaymakers from the industrial towns of the Midlands, a clientèle already developed by Thomas Cook. He planned the town as a resort from 1877 and it expanded rapidly. Skegness beaches have won the Blue Flag award for cleanliness several times, most recently in 2011. The shape of the beach has changed considerably over the last two decades. In the 1990s an extensive programme of enhancement to the sea defences was carried out, with the installation of a rock armour along the length of Lagoon Walk; this provided a very effective barrier against the power of the sea, but as a result the highest tides were forced south.

Skegness has often exploited its position on ‘The Drier Side of Britain’ as a marketing tool and the resort is much favoured by many with mobility issues or heart conditions because of its flat terrain. One of the town’s best known landmarks is the Clock Tower, built in 1898/99 and funded by public subscriptions. Many will remember the little bus which, in the 1940s and ‘50s, ran from the Clock Tower to the north end of the promenade. It was called the ‘Penny all the Way’ and, unsurprisingly, cost just one old penny.

Skegness pier opened on Whit Monday, 1881 and was the fourth longest in England at that time, at 1,843 feet. Steam boat trips ran across the wash to Hunstanton from 1882 to 1910. In 1978 the pier was badly damaged by severe gales and its length was reduced. In recent years the pier has undergone a major refurbishment and, although shorter, it is today perhaps a better and more usable tourist attraction.