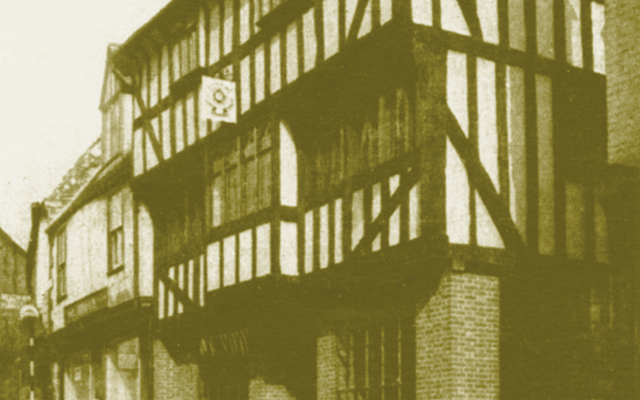 In this issue Alan Middleton takes a look at the building that became known as The Cardinal’s Hat, a three-storey, half-timbered structure near to the top of the High Street in Lincoln at the junction with Grantham Street.
This Grade II listed property was built in the late fifteenth century and was the town house of the Granthams, an important family of wool merchants, hence the name of the street.

At the time it was built, the house was at the heart of the old walled city, the centre of the commercial district, close to the fish, poultry, meat and corn markets. It is a fine example of a late medieval, timber framed house. Early in the sixteenth century the Granthams moved to a country house near Wragby and their former home became a public house in 1514. It is believed that the pub was named after Cardinal Thomas Wolsey, who was Bishop of Lincoln in 1514/15 and later became Lord Chancellor to Henry VIII.

In 1522 the landlord was William Barker and he paid rent of 26 shillings and 8 pence (£1.33) a year to the Cathedral Authorities. The inn stood close to the old St Martin’s church, of which now only the churchyard remains. At that time apparently, it was the custom for the parishioners, after conducting parish business in the church vestry, to adjourn for refreshments at parish expense and they usually chose the Cardinal’s Hat for that pleasure.

By 1609, William Marritt was landlord and the property comprised of living accommodation and rooms associated with the running of an inn on the ground floor, with bed chambers, some grand, some more ordinary, on the first and second floors. During the civil war in the seventeenth century, Lincoln was, in turn, occupied by Royalists and Parliamentarians and an enormous amount of damage was done to the Cardinal’s Hat during the hostilities. After the parliamentary victory the Cathedral Chapter was abolished and the property was put up for sale. From then on, the building changes hands many times, but by 1801 had ceased to be an inn.

It was over the next century-and-a-half used as a poultry shop, grocer’s, baker’s, provisions dealership, and finally a furniture shop which closed in 1938. After that, without much care, the building became derelict and remained so throughout the war and after.

In 1952 the St John Ambulance Brigade was in urgent need of a new HQ and bought the Cardinal’s Hat for £6,000. The timber framed structure had been hidden behind concrete rendering for many years, but once removed it attracted the interest of local historians, architects and many others. It was going to be expensive to restore but voluntary contributions came in from many quarters and the building was eventually returned to its former glory. It so happened that Hartsholme Hall was being demolished at the time and the team were able to incorporate a door and some stonework into the restored Cardinal’s Hat.

The St John’s Ambulance Brigade continued to occupy the rear of the building but from 1975 to 1994 the part fronting the High Street became the Lincoln branch of the Halifax Building Society and later the Bank of Scotland. Then in 2014 the whole property was bought by a Lincolnshire businessman, Rupert Abbott. There were long and complicated negotiations with local authority planners and conservation officers and licensing officials, but in 2015, the Cardinal’s Hat once again became a quality drinking establishment.

The finished building is indeed impressive. On offer is a very fine selection of cask ales and ciders sourced from artisan brewers, quality lagers, wines and spirits and a most interesting and appetising food menu. The food, drink and history are all there to be enjoyed.