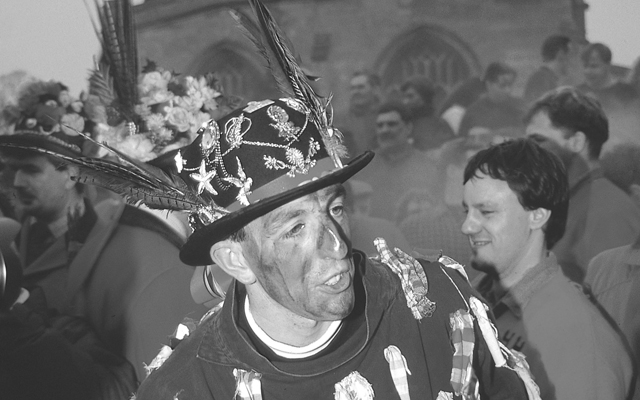 The Haxey Hood is one of the oldest traditional events in England and takes place on the Isle of Axholme in Lincolnshire.
Legend has it that in the fourteenth century Lady de Mowbray, wife of the Isle landowner, John de Mowbray, was out riding on Upperthorpe Hill – the hill that separates Haxey from Westwoodside – when her silk riding hat was blown away by a strong gust of wind. Thirteen farmworkers rushed to help and chased the hood all over the field where they were working. It was finally caught by one of them but he was too shy to hand it back to the Lady and persuaded one of the others to do it. She thanked the man who had returned the hood and said he had acted like a Lord, but the man who had actually recovered the hood was a fool. She was so amused by what she saw that she donated thirteen acres of land on condition that the chase for the hood be re-enacted every year. This re-enactment, over the centuries, has become known as the Haxey Hood and takes place on 6th January, the twelfth day of Christmas, unless the 6th falls on a Sunday, in which case it is held on the 5th.

At around noon on the due day, the Lord of the Hood and his eleven Boggins begin a tour of the four public houses in the parish: the Carpenter Arms in Westwoodside, the Duke William, the Loco and the Kings Arms, all in Haxey. As they go they sing traditional songs, including ‘John Barleycorn’, ‘Drink England Dry’, and ‘The Farmer’s Boy’. They then proceed to the front of St Nicholas Parish Church, from where the Fool makes a speech of welcome. During this speech a fire is lit behind him with damp straw and the smoke rises up and around him. This ritual is known as smoking the Fool. It is in fact a modified version of an earlier custom, in which a substantial fire was lit and the Fool suspended over it, only being cut down when he was on the verge of suffocation. The Fool ends his speech with the traditional words, “Hoose agen hoose, toon agen toon, if a man meets a man knock ‘im doon, but doan’t ‘ot ‘im,” and the crowd chant along with him. (This translates as: House against house, town against town, if a man meets a man knock him down, but don’t hurt him.)

At this point everyone moves to nearby Upperthorpe Hill where, after some preliminaries for the benefit of the children, the main game is played with a ‘hood’ made up of a two-foot length of stout leather, this being the nearest modern equivalent that can be used in place of the original hood which was allegedly a freshly slaughtered bullocks’s head.

There are no official teams, all the participants simply join in and attempt to move the hood towards their favoured pub. The Lord acts as referee as best he can and the Boggins round up any stragglers as well as protecting property. The game is rather like a large rugby scrum, in which the hood is pushed or pulled in the desired direction. No one is allowed to run with or throw the hood. The objective is to manoeuvre it into one of the four pubs and the game ends when the hood is touched by the pub landlord standing on the front step of his establishment. The landlord then takes possession of the hood and proudly displays it for the following year.