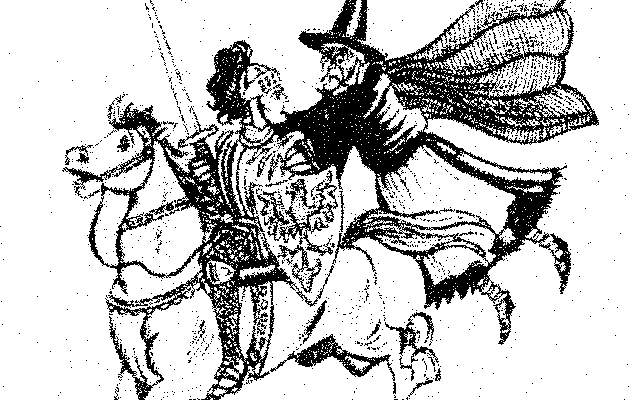 The legend of Byard’s Leap

Lincolnshire is a county awash with myths and legends and the tale of Byard’s Leap is one of the best known.
Centuries ago, at the time of the Crusades, many parts of Lincolnshire were wild and desolate. There were villages and hamlets which had not yet been adopted by the civilised world. Travellers would not linger in or around these places, for fear they would be contaminated.

One of the grimmest was Ancaster Heath and at the junction of Ermine Street and the Newark to Sleaford Road (now the A17) lived a woman by the name of Meg. It is said that, in her youth, Meg had been an attractive girl who was deeply in love with a young man who worked on the land. They became engaged but one day, to Meg’s great disappointment, he deserted both her and the area in search of adventure in the army. Not long after he departed, Meg became involved with a dark stranger who had appeared as if from nowhere.

Local people believed that the stranger possessed devilish powers and that Meg fell completely under his evil influence. No sooner had he arrived than he left without trace, and Meg was a changed woman. No longer happy and cheerful, but morose and sullen; she wanted nothing to do with her former friends. Locals were convinced that Meg had sold her soul to the devil and in return, the stranger had conferred on her the powers of a witch; she quickly became known as ‘Old Meg’.

She was now filled with malevolence and hatred for all around her. On a whim she would call up a storm to batter the helpless travellers who dared pass her hovel. On other occasions she would send a plague to destroy the cattle of farmers she took a dislike to, or strike down their crops as they grew in the fields. Any children who dared to look at her were immediately inflicted with horrid deformities. The local peasants were desperate and prayed for someone to rescue them from their appalling plight. When help did arrive it was in a surprising and unexpected form.

To everyone’s astonishment and delight it was none other than Meg’s former sweetheart, returned after a distinguished military career and with a knighthood no less. He challenged Old Meg to fight to the death and was prepared to face her on his doughty old mare, Byard, who had carried him through many battles, but was now decrepit and blind.

When the day of the showdown arrived, Byard took on a new lease of life; no longer worn out she pranced around like a young horse. The knight buckled on his sword, mounted the old mare and rode off to the witch’s hut. Old Meg responded by rushing at her adversary, spitting fire in his face and releasing a blood curdling shriek that could be heard all over the Heath. He swung his sword and struck her a glancing blow. Like a tiger, she jumped onto the back of the horse and dug her claws deep into the animal. Byard immediately leapt into the air, an incredible jump of some sixty feet, before crashing back to the ground with such force that the old witch lost her grip and fell off. Before she could recover and without a moment’s hesitation the knight delivered the fatal blow with his sword. The old witch was dead.

In time honoured fashion, the peasants hammered a stake through her heart and buried her at the crossroads. Byard had saved the day and her hoof prints can still be seen where she came to ground, at Byard’s Leap.