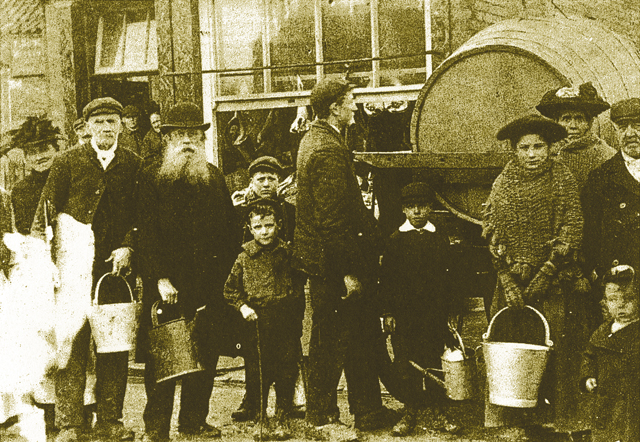 In 1904/5 Lincoln was plunged into panic and despair when the city was struck by a devastating typhoid epidemic. By the late 19th century purer, better quality water was replacing the primitive provision which had been the cause of outbreaks of the disease in the past.
Sadly, these improvements were not uniform throughout the country and Lincoln was one of those places where attention to water quality had been neglected. Although the epidemic did not start until December 1904, there had been a long history of warnings and calls for improvement to water quality stretching back over twenty years.

As early as August 1883 attention was drawn to contamination of the River Witham and anglers were discouraged from fishing its waters. A year later Lincoln Corporation discussed the water problem but failed to take any action. Later in 1884 there was a campaign led by the architect William Watkins to improve the quality of Lincoln’s water but his resolution in Council was defeated by thirteen votes to four. The Council also treated with derision a letter of complaint from the Cathedral Precentor which had been referred to him by the Board of Health in London. Complaints continued throughout the 1880s and ’90s but the corporation took no action, claiming the water quality was ‘reasonable’.

Despite a warning by the Medical Officer, Dr Charles Harrison, the water was judged by a chemist to be ‘not bad enough to be condemned as dangerous’. Hardly a ringing endorsement! Dr Harrison submitted further reports but still nothing happened. Concern increased further in 1888 when the War Authorities alleged that the water at Lincoln Barracks was unfit for human consumption.

Then a case of typhoid was diagnosed at ‘The Lincoln County Asylum’ at Bracebridge Heath. Sewage from this establishment was treated at a small, and almost certainly inadequate, sewage farm before being discharged into the Witham. It was later established that this was the source of the pollution, as the city drew its water from the river. So after more than twenty years of complaints from numerous sources and denial by Lincoln Corporation it is hardly surprising that typhoid should break out in the city. In fact it is amazing that it took so long, particularly in view of the 1888 case at Bracebridge Heath. But when it did come it was virulent, fatal and in epidemic proportions.

The first case was notified on 2nd December 1904 and the second twenty days later. By 18th January 1905 there were eighteen notified cases in the city. Thirteen thousand handbills were distributed advising people to boil their tap water before drinking it. Ultimately over 1,000 cases were notified, of which 131 proved fatal.

One ward at the County Hospital was totally devoted to typhoid, as were two at the Long Leys Road Fever Hospital. In addition temporary hospitals were established at Broadgate Drill Hall, Blenkin Hall, Vernon Street Mission and Newport Hall. Hospital beds could not be provided for all victims and many had to be nursed at home.

Supplies of pure, safe water were sought and happily supplied by, among others, Newark UDC, James Hole and Co. Brewery, Willoughby and Welton villages. People queued all over the city with their buckets to collect clean water. Although typhoid was generally regarded as a ‘slum disease’, this epidemic was no respecter of postcodes; victims came from affluent as well as poorer areas.

The outbreak was largely over by the spring. The British Medical Association condemned the actions of those Corporation Members, ’who had repeatedly voted against action on Lincoln’s water’. The epidemic led to the construction of the water tower on Westgate and water being pumped from Elkesley in Nottinghamshire.