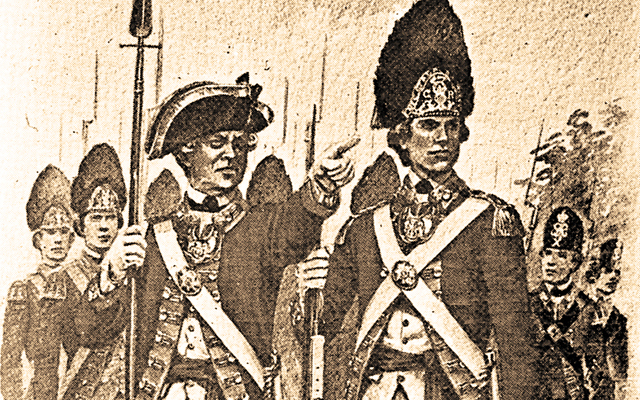 The 10th Foot, later known as the Royal Lincolnshire Regiment, served with great distinction in many corners of the world for 275 years.

It all started in 1685 when the exiled Duke of Monmouth, the illegitimate son of Charles I, landed at Lyme Regis to claim the throne from the unpopular King James II. He soon rallied a band of 5,000 supporters. Eleven regiments of foot (infantry) were quickly raised to oppose him. One of these, raised by the Earl of Bath, then Governor of Plymouth, was known as the 10th Foot, or the Earl of Bath’s Regiment. However, before they were ready for action, the Duke of Monmouth had been caught and beheaded. With the crisis over, some of the newly formed regiments were disbanded, but the 10th Foot were retained.

In 1688 Prince William of Orange landed at Torbay to seize the throne. The Earl of Bath and his regiment decided to support him. Shortly after King James II heard this news he fled to France. So the regiment which had been formed to protect King James played a large part in deposing him. The 10th Foot went on to serve under the Prince of Orange, now King William III, in his campaigns against the French King Louis XIV. In 1730 the 10th Foot were sent to garrison Gibraltar. They stayed for nineteen years and were then posted to Ireland. Problems started to arise in the American colonies and the 10th Foot were sent from Ireland to America in 1767 but the problems got worse. In 1775 they were sent to Concord about eighteen miles north of Boston to destroy some stores which the Americans had collected. At Lexington, just outside Boston, they came across some American militia who refused to lay down their arms. Several opened fire and a solider of the 10 Foot was injured. This was the first blood to be shed in the American War of Independence. They also saw action at Long Island, in Brooklyn, Rhode Island and Philadelphia, but casualties and illness took their toll and in October 1778 the regiment returned home.

The 10th Foot had no connection with Lincolnshire until 1782 when all infantry regiments took on county titles to aid recruitment. They were now known as the Tenth or North Lincolnshire Regiment, and became the Lincolnshire Regiment in 1881. The Royal Prefix was added in 1946 for outstanding service in the Second World War. The Regiment were despatched to Jamaica in 1786, but recalled in 1795 and stationed at Lincoln for the first time.

During the American War of Independence the 10th attained the nickname of the ‘Springers’ because of their speed and mobility, but later became known as the ‘Poachers’ reflecting the regimental march. But the best known nickname is the ‘Yellowbellies’, the origins of which are obscure. Some claim it derives from yellow waistcoats worn with early uniforms; in fact, yellow waistcoats were never worn. Others claim it is associated with the regiment crawling through yellow mud on some foreign battlefield, or that it is connected with a yellow-bellied lizard common in some parts of Lincolnshire. Whatever the origin, all Lincolnshire folk have come to be known as ‘Yellowbellies’.

In the course of its history the regiment fought in Europe, Asia, Africa and America, earning 131 Battle Honours and ten Victoria Crosses. In 1960 the regiment was amalgamated with the Northamptonshire Regiment and later became the Royal Anglian Regiment. The Royal Lincolnshire Regiment’s museum is now housed within the Museum of Lincolnshire Life on Burton Road.