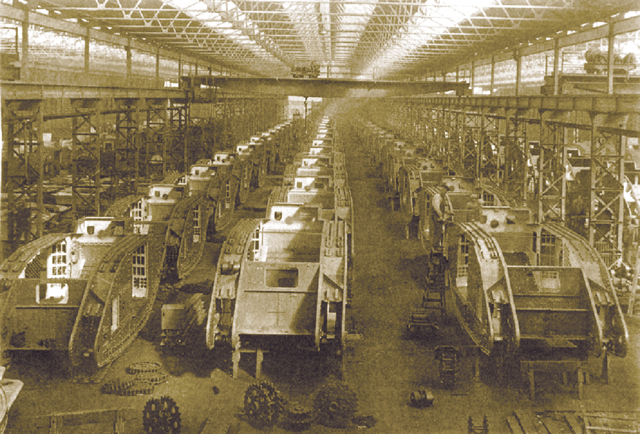 The tanks of Lincoln

In the history of combat, few things have had a more dramatic impact than the invention of the tank and Lincoln was at the very centre of its development.
When the Great War started in 1914, many believed it would be over by Christmas, but it quickly reached stalemate, with opposing forces bogged down in 450 miles of fortified trenches stretching from the North Coast of Belgium to the Italian Alps.

Infantry and cavalry were useless against the mud and enemy machine guns. Thousands of men were dying every day and there was no sign of a breakthrough. The problem for the Admiralty Landships Committee, headed by Winston Churchill, was how to develop an armoured fighting vehicle which could cross trenches, mud and barbed wire and deliver an attack capable of breaking the deadlock. The committee turned to Lincoln agricultural engineers, William Foster & Co.

Before the war, Foster’s had built tractors, threshing machines and steam engines, as well as experimenting with a caterpillar-tracked vehicle for difficult terrain. With the outbreak of war, Foster’s heavy Daimler tractors were used to haul massive howitzer guns and heavy equipment, but the invitation to develop this new fighting machine presented an altogether different challenge.

The Admiralty stressed the need for secrecy so when the workforce started to ask “what exactly are we making?”, they were told, “Watercarriers for Mesopotamia,” (modern day Iraq), but from this somewhat clumsy title, the workers came up with their own more simple name, Tanks.

Three men were key to the success of the project. The first was Foster’s managing director, William Tritton (later Sir William), a dynamic man who had revitalised Foster’s fortunes in the pre-war years and who quickly recognised the opportunities which the war presented. He was assisted by chief draughtsman, William Rigby who had joined Foster’s as an apprentice in 1903. The third member of the team was Walter Wilson, a naval lieutenant with engineering flair, seconded to Foster’s.

The innovation and design expertise of these men was backed up by the loyalty and sheer hard work of Foster’s workforce, which rose from 350 in 1914 to over 2,000 at the height of wartime production. The vast majority of them were women, and they regularly worked twelve-hour shifts at the Wellington factory in the Waterloo Street/Firth Road area of Lincoln.

The first tank produced was ‘Little Willie’ (named after Tritton) which took thirty-seven days to produce and was tested on the South Common in September 1915. This was little more than a fifteen-tonne armoured box on caterpillar tracks which frequently came off during manoeuvres. The men persevered with different designs, often working through the night in a little room at the White Hart Hotel. Eventually a track was devised which went all the way around the tank’s body. This twenty-eight-tonne version was initially known as ‘Big Willie’ but was later changed to ‘Mother’ and proved much more reliable.

Foster’s went into full-scale production and the tank saw its first action at Flers, France in 1916, seven months after the first order had been placed. It immediately changed the pattern of the war, causing panic in enemy ranks and boosting the spirits of Allied troops. Further improvements were made through to the end of the war. A Mark IV tank, known as ‘Flirt’ was made in 1917. A restored ‘Flirt’ is on display at the Museum of Lincolnshire Life.