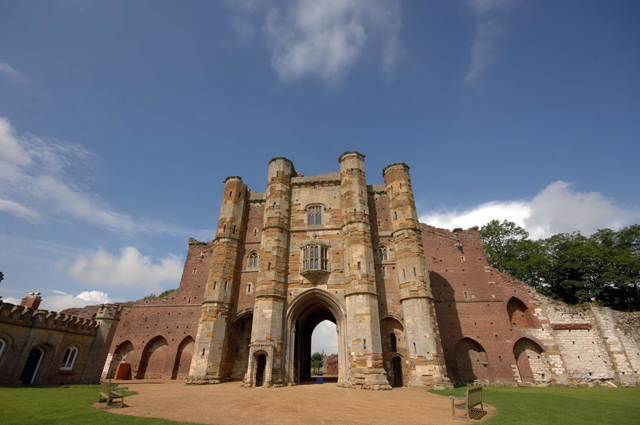 Standing just a few miles south and west of the Humber in North East Lincolnshire is one of the county’s most amazing, but perhaps lesser known, tourist attractions: Thornton Abbey and Gatehouse.
At the end of a quiet lane the enormous and ornately fortified gatehouse comes into view. It is the largest and certainly one of the finest in England; it is a stunning vision and well worth a visit.

Surrounded by a moat, it stands two storeys high and is structurally intact. The walls are very thick and there are few windows in the building. The outside is adorned with three almost life-sized statues directly above the gate. A bridge over the moat adjoins the gatehouse.

On 13th January 1139 William Le Gros, Count of Albemarle in Normandy and Lord of Holderness in Yorkshire, pledged to found a new Augustinian priory dedicated to St Mary. Augustinians were canons or priests, sometimes known as black canons, who lived a communal life under the rule of St Augustine but who also undertook pastoral duties outside the abbey.

Le Gros endowed Thornton, the first of his five foundations, with a generous income from churches and townships which was supplemented by gifts from other lords. The priory was raised to the status of an abbey in 1148 and in 1518 became a mitred abbey.

No visitor can fail to be impressed by the brick built monastic gatehouse, built at the end of the fourteenth century. The founding abbey from the twelfth century was Romanesque in style but nothing of it remains above ground. In the mid-thirteenth century Thornton’s abbot, William of Lincoln, instigated a major rebuilding, possibly prompted by the great flood of 1253. This later abbey from the thirteenth/fourteenth century was early Gothic in style but little remains of the building except for three walls of the chapter house and part of the cloister.

The first canons to arrive at Thornton from Kirkham priory in North Yorkshire precisely one year after Le Gros gave his pledge probably encountered a peninsular of marginal agricultural land overlooking the marshy valley of Skitter Beck. This navigable tidal tributary of the Humber estuary proved central to the abbey’s economic life, as it facilitated regional and international trade.

The foundation of the abbey coincided with the start of a warm, dry century. Falling sea levels allowed religious houses in this low lying region to expand the pastures that they owned through land reclamation. The stock-keepers’ accounts for 1313 show that the abbey kept 8,000 sheep and that wool production contributed most to Thornton’s gross annual income of £1,543 – comparable to that of a major nobleman.

Thornton Abbey was closed by Henry VIII on 12th December 1539 as part of the dissolution but the buildings remained more or less intact for some time and Henry VIII and Catherine Howard stayed there early in October 1541. Two months later Henry selected Thornton, among a small group of elite religious houses that also included Westminster Abbey, as a college for training priests for service in the newly established Church of England.

In 1547, however, the college was suppressed by Edward VI. Since the dissolution, the site has been owned by Henry Randes, Bishop of Lincoln, Sir Robert Tyrwhitt of Kettleby, Sir Vincent Skinner of Westminster, Sir Robert Sutton, George Appleby and in 1816 Charles, 1st Baron Yarborough.

In 1938 the fifth Earl handed the care of the Abbey remains to HM Office of Works. The site is currently in the care of English Heritage and is open to the public.